Is our reality, including its forces and particles, based on the strange properties of numbers with eight dimensions called “octonions“? A physicist thinks so, having found a way to expand 40-year-old research to reach surprising new directions.

First, a brief history of numbers.

Regular numbers that we are familiar with in our everyday life can be paired up in a special way to create “complex numbers,” which act like coordinates on a two-dimensional plane. This was discovered in 16h-century Italy by the mathematician Gerolamo Cardano. As explains Natalie Wolchover of Quanta Magazine, you can perform operations on complex numbers like adding, subtracting, multiplying and dividing by “translating and rotating positions around the plane.”

An Irish mathematician by the name of William Rowan Hamilton discovered in 1843 that if you pair the complex numbers in a certain way, they can form 4-D “quaternions.” He was apparently so excited about figuring out that formula, that he immediately carved it into the Broome Bridge in Dublin. Not to be outdone, John Graves, a friend of Hamilton’s who was a lawyer and math whiz, showed that quarternions can be paired up to become “octonions” – numbers that can assume coordinates in an abstract 8-dimensional (8-D) space. 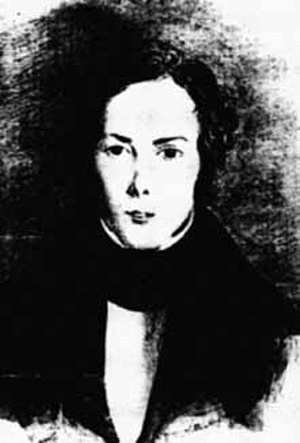 Each type of numbers has been utilized extensively in the development of modern physics, with complex numbers used in quantum mechanics and even the quaternions employed in Albert’s Einstein’s special theory of relativity.

What hasn’t been completely understood and put to work – the octonions, usually represented by the capital letter O and whose multiplication rules are encoded in a triangular diagram called the Fano plane (that looks like something the Freemasons would devise). 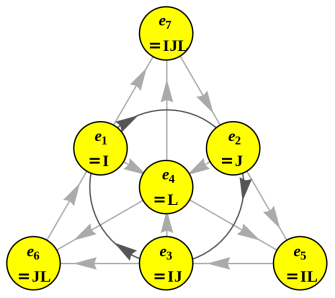 A mnemonic for the products of the unit octonions using the Fano plane.

The mystery of these numbers has led to speculation among researchers that they have a special purpose and can eventually explain the deeper secrets of the universe. In an email interview with Quanta Magazine, the particle physicist Pierre Ramond from the University of Florida explained that “Octonions are to physics what the Sirens were to Ulysses.”

In 1973, Murat Günaydin, the then-Yale-graduate student (now professor at Penn State) and his advisor Feza Gürsey, discovered that there is an unexpected link between octonions and the strong force that keeps quarks together in an atomic nucleus. Günaydin continued his research quite outside the mainstream, looking at connecting the numbers to such ideas as string theory and M-theory.

In 2014, Cohl Furey, a graduate student at the University of Waterloo, Canada, built on Günaydin’s work by finding a new use for the hard-to-imagine numbers. She devised an octonionic model that includes both the strong and electromagnetic forces. Now a postdoc in UK’s University of Cambridge, Furey generated a series of results that link the octonions to the Standard Model of particle physics, in work that has been praised by other scientists. She has “taken significant steps toward solving some really deep physical puzzles,” said Shadi Tahvildar-Zadeh, a mathematical physicist at Rutgers University.

Others, like the noted string theorist and Imperial College London professor Michael Duff, are more reserved, excited about her work but saying it’s “hard to say” yet if it will become “revolutionary.”

Furey is undeterred by working in a currently obscure field, thinking of her research as a “process of collecting clues,” as she explained in an interview.

She published a paper in May 2018’s TheEuropean Physical Journal C, where she consolidated several of her findings, looking to complete the standard model of particle physics and find the rightful place in our understanding of the world for the octonions.

Cohl Furey on the Octonions and Particle Physics

For those inclined to delve deeper into the math, check out this fascinating graphic:

Tags
albert einsteincosmosmathphysicssciencestring theoryuniverse
In this article
albert einsteincosmosmathphysicssciencestring theoryuniverse
Related
Starts With A Bang
This one-page calendar will change how you view the year
It’s simpler, more compact, and reusable from year-to-year in a way that no other calendar is. Here’s both how it works and how to use it.
The Present
Mathematics explains why non-conformists always end up looking alike
It’s called the “hipster effect,” and a study from Brandeis University mathematician Jonathan Touboul explains how it happens.
The physics of entropy and the origin of life
How did complex systems emerge from chaos? Physicist Sean Carroll explains.
▸
6 min
—
with
Sean Carroll
The Present
Top 10 most popular stories on Big Think in 2022
These were the stories you clicked on the most.
Neuropsych
Honeybees join humans as the only known animals that can tell the difference between odd and even numbers
Parity tasks (such as odd and even categorisation) are considered abstract and high-level numerical concepts in humans.
Up Next
High Culture
The 5 most intelligent video games and why you should play them
Some games are just for fun, others are for thought provoking statements on life, the universe, and everything.