Are video games art? Some people think so and make excellent arguments supporting their position. Others, such as the late great Roger Ebert, thought not and had equally well argued essays explaining why. While the debate is far from settled, video games have long dealt with big issues in brilliant ways rivaling any novel, film, or painting.Here, we have five examples of games that intelligently deal with these concepts, how they treat their topics of choice, and why you should play them. 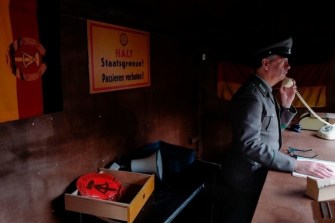 The concept of a fun game about paperwork shouldn’t even be possible, yet Papers, Please works. It makes the enormous issues of immigration, national security, and collaboration with dictatorships accessible and fun. It was designed by Lucas Pope.

You play as a customs and immigration officer in a fictitious communist country tasked with reviewing the paperwork of would be immigrants, tourists, and the like. Your job is to make sure that all of their paperwork checks out and to alert the authorities if it doesn’t. You do have the ability to let people in who otherwise would be detained, but is the woman claiming she just wants to see her husband again telling the truth or a carefully crafted lie? Is the old man with a misspelled name on his visa senile or a terrorist trying to sneak into the country?

You are paid for how many people you process correctly and can accept bribes from people who you let slide despite their incorrect paperwork. At the end of each day, the game makes you buy food, housing, and utilities for your family with the money you earned. If you frequently defy the authorities in the name of making a more moral choice or mess up too many times at your job, your family goes hungry or homeless.

The game also features a newspaper that shows you the results of your choices, showing how even a seemingly minor moral choice can have consequences that don’t disappear with the end of the workday. The game manages to show how even when you know a system is unfair you might not be in any position to fix it or even rebel meaningfully.

It also manages to humanize the seemingly villainous character of a bureaucrat in a dictatorship, a feat few other works pull off.

Explores: The nature of game design and the ability of games to explore big ideas.

This Indie game by Davey Wreden is a walking simulator that examines how difficult it is for game designers to give you meaningful options while also telling a coherent story. It also sends up other games that pose moral dilemmas by looking directly at the mechanics needed to do it well.

The game is a walking simulator that features a godlike narrator who comments on what option he wants you to take almost every time you are presented with a choice. You don’t have to listen to him, however, and can choose to do something else. In one instance, you can select to go through a door on the right rather than on the left, forcing him to come up with a new story to account for your choices. Eventually, this route leads you to a room that was unfinished by the developers and he comments on how nobody thought you would ever choose to go into that particular room and there is nothing to do there.

While the game offers a ton of endings which can be influenced by your choices, in other instances, the narrator stresses the meaningfulness and importance of pointless actions you take or the gravity of illusionary choices. By doing so, the game highlights how every aspect of a game, even one with “choices” was pre-written or otherwise planned out even though you are lead to believe that you are in control while you play.

The game is also notable for making fun of how other games will nearly force you to take a particular set of actions and then shame you for making them in an attempt at having the illusion of moral choices. In this case by railroading you into trying to save a cardboard image of a baby for four hours and then berating you for failing or giving up.

It is also hilarious, and you ought to play it for the humor alone. 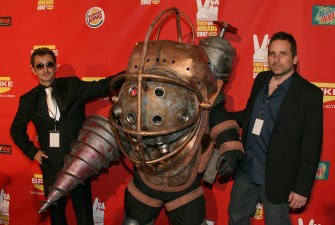 Bioshock creators Greg Gobbi and Ken Levine pose with a “Big Daddy” from the first game of the series.

Explores: The practical elements of an ideological utopia and the concept of free will

No list like this can be complete without mentioning at least one of the Bioshock games. The spiritual successors to System Shock, the games explore the fantastic cities of Rapture and Columbia and what happens when utopian social philosophy meets reality.

The original Bioshock deconstructs the philosophy of Ayn Rand, and even named the villain after her. The city of Rapture is based on Rand’s Utopian Galt’s Gulch and shows what happens when you put a lot of greedy people in one place with limited resources. In this world of unchecked individualism, the game also finds time to ask questions about free will and personal autonomy that, when combined with the nature of the game, make for one of the more memorable twists in video game history.

Bioshock 2 is famously the unloved middle child of the series but is still quite fun to play. In contrast the first game, it explores collectivist extremism rather than individualist extremism. Like the first, it also has a multiple endings that can be unlocked by the morality of the player’s choices.

Bioshock Infinite dives into the ideas of American exceptionalism, the steampunk genre, and the romantic image of left-wing revolutions. Ditching the underwater city of Rapture for the flying city of Columbia, the player is given a beautiful image of everything a certain kind of person living in 1910 could ever want society to be. It is only over time, as the player explores the world, that the disturbing elements that keep the society up are exposed. Like its predecessors, it also dives into the question of free will but does it by asking both grand questions about metaphysics and practical questions of if it even matters that we have it.

It also has an amazing anachronistic soundtrack.

Explores: The moral choices in a Nuclear war

Sometimes the simplest things in the world are the most meaningful. Missile Command is a 1980 arcade game published by Atari, and it was designed to be as meaningful as possible for a game that came out on 8-bit.

The game is simple; you play the commander of three missile bases who has to defend six cities from nuclear attack. You have a limited number of rockets to shoot down countless incoming missiles which can hit your cities or rocket sites. You lose when all your cities are destroyed. Despite the simplicity of the design, missile command explores issues of nuclear war better than many other games through its mechanics alone.

The issues that started the war are deemed irrelevant, as are what specific cities you’re defending. All you know is that you have to protect these cities from the onslaught. However, over the course of a long game, you will be forced to decide which cities will be saved and who will be allowed to die in order to conserve ammunition. The choice between saving your missile bases and saving the citizens of the cities eventually comes up, as losing a base also has consequences. Who should live, who will die? The game makes you choose again and again.

Most brilliantly, like most 80’s arcade games, you can’t win; the just game gets harder, and you keep going until you lose. The game also, famously, doesn’t have a game over screen. It has only the words “The End” ominously shown after your cities are obliterated.

The game’s designer, Dave Theurer admitted that making the game gave him nightmares of dying in a nuclear war. When’s the last time you heard of an eight-bit game doing that? 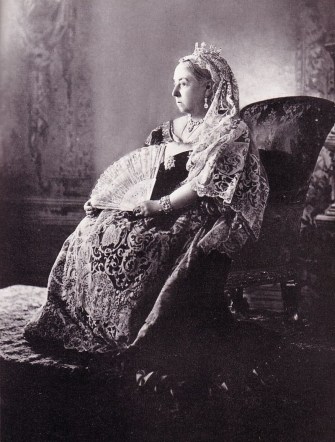 Queen Victoria, after whom the game is named, as she appeared after 60 years of rule.

Public Domain, photograph by W&D Downey and available on Wikicommons

A 4-X game by Paradox interactive which could use a sequel, it has a legion of dedicated fans and brilliant mechanics for examining how the idea of progress might not have been all it was cracked up to be.

To start, you select a country that existed in 1836 and guide it to 1936. Points are earned for having prestige, industry, and a large army and lost for losing face in diplomacy, falling behind economically, and disarmament. The game also features detailed explanations of social and scientific advances that pop up as your country makes them.

As the game goes on your country grows, your scientists discover amazing new things and put them to use, and your diplomats use the balance of power system to keep crises from spinning out of control. You have to take sides during crises to keep the peace, join the scramble for Africa in order to not fall behind your rivals, and manage social issues in your country brought on by the rapid changes needed to modernize and raise your score.

This continues until, inevitably, everything goes to hell. The balance of power fails and a world war or three breaks out. The advances in science you made all game gives you weapons that allow you to kill millions and an industrial base that keeps wars going for years. The happy, optimistic explanations of all the advances your scientists made slowly decay into confessions that the new advances now mean the world makes less sense than before. Fascist and communist dictatorships crop up all over the globe as liberal democracy fails to solve the problems dominating the world it used to oversee.

It leaves you asking if any progress was made over the one hundred years of game play, or if it was even possible to make any.

With a new telescope on the horizon, we reflect on the best pictures of space that came before.
Neuropsych

From boosting empathy to improving therapy, virtual reality is poised to change our ideas of the self.
Up Next
Health

Intellectual activity and dementia: It’s more of a help than a cure.

Remaining mentally active slows dementia’s symptoms, if not its progress.