All of them were born in Scotland in 1936. And according to the Scottish Council for Research in Education archives, all of them took the same intelligence test on June 4, 1947 when they were 11 or 12, depending on where their birthdays fell on the calendar. (The tests were part of a nationwide survey.) A little more than half a century later, researchers from the University of Aberdeen decided to take advantage of this remarkable data set and recruited 498 of the then-64-year-olds to study the effect of intellectual engagement on one’s mental condition during later years. Their study, published online in BMJ (formerly the British Medical Journal), came to two conclusionsc:

Remaining intellectually active does not effect the likelihood of dementia or slow its physiological progression, contrary to findings of some other studies.

As the study’s authors write in The Conversation, “‘Use it or lose it’ is the received wisdom when it comes to cognitive ability. But is there any truth in this old saw? Our latest study suggests that it depends how much ‘it’ you have to start with.” 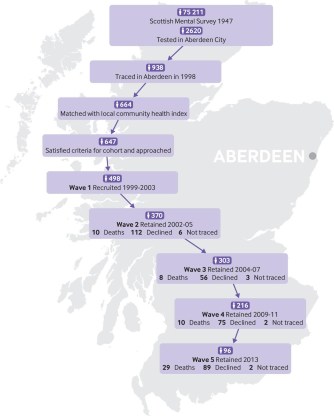 When the study’s subjects were first recruited in 1999, they were administered the first of a series of cognitive tests. The tests were repeated at regular intervals until subjects reached age 78, or died, as 57 of them did.

At the end, an overall typical intellectual engagement score was assigned each participant.

One type of intellectual activity seemed to give subjects the best bang for their mental buck: problem-solving. “Engagement in problem solving is an independent contributor to late life cognition and has a unique effect over and above the effect of other life course variables,” write the researchers. Memory and cognitive speed were unsurprisingly affected by age.

It also turned out that subjects with higher scores in youth tended to test similarly as older adults. “Childhood intelligence was associated with intellectual engagement,” write the study authors, “which raises the question: ‘Do smarter people engage more, or are they smarter because they engage?'” 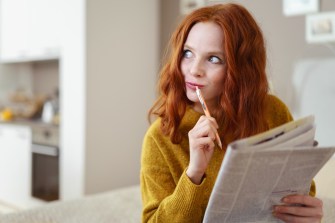 How this helps you plan ahead

How this helps you plan ahead

Since remaining intellectually active as you age doesn’t prevent you from acquiring dementia, why bother? Well, aside from the enjoyment to be derived from staying alert and engaged — not to mention the fun of cracking that crossword or Sudoku — it can provide a meaningful defense against dementia’s ruinous symptoms.

“At this stage, we can foresee how lifelong intellectual engagement contributes to protection from falling below some intellectual threshold where you would be considered impaired. This is achieved by starting from a higher point,” say the scientists.

The use of AI within mental health services could be a game-changer.

Humanity’s most advanced tech still hasn’t unraveled the mysteries of the human mind. Can brain scans show us how we store memories?
▸
with
Lisa Genova
Neuropsych

Treatments for depression have significantly improved since the 1980s. So why isn’t the rate of depression decreasing?
High Culture

Undiagnosed brain disease or divine inspiration? The origins of the French composer’s most provocative composition remain up for debate.
Up Next
Starts With A Bang

Ask Ethan: How Does A Photon Experience The Universe?

In this artistic rendering, a blazar is accelerating protons that produce pions, which produce neutrinos and gamma rays. Photons are also produced. While you might not think much of the […]