Scottish historians and artists have created a highly detailed model of the type of dogs raised and revered by a group of Neolithic humans. The model, soon to be on display in Orkney, shows us that, despite 4,000 years of evolution, some things just don’t change.

The Dogs of Neolithic Scotland

The skull used to recreate the image once belonged to a dog who lived 4,000 years ago in a Neolithic settlement in Orkney, off the northern coast of Scotland. Its skull was found in Cuween Hill Chambered Cairn, a burial mound used by ancient farmers. While the tomb held only eight human bodies, the skulls of 24 dogs were found there. The evidence suggests that the dogs were ritually buried.

Steve Farrar, the interpretation manager at Historic Environment Scotland, explained the canine skulls suggest the dogs might have held a special place in the hearts of early Scotsmen.

“Just as they’re treasured pets today, dogs clearly had an important place in Neolithic Orkney, as they were kept and trained as pets and guards and perhaps used by farmers to help tend sheep. But the remains discovered at Cuween Hill suggest that dogs had a particularly special significance for the farmers who lived around and used the tomb about 4,500 years ago. Maybe dogs were their symbol or totem, perhaps they thought of themselves as the ‘dog people.'”

The animal itself resembled a European grey wolf and was about the size of a “large collie.” While the owners’ could not be reached for comment, it is also presumed that he was a very good boy. 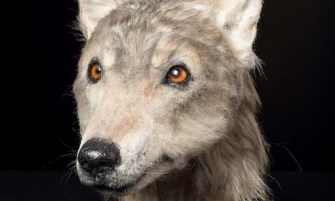 How did they make that model?

While the faces of ancient humans have been reconstructed before, this marks the first time that an ancient dog has been given the same treatment. The canine model was created by forensic artist Amy Thornton using the same techniques she normally uses to create models of human heads. She explained her process:

“The reconstruction was originally created in clay using traditional methods, with a 3D print of the Cuween Hill skull as the base to build the anatomy on to. The completed sculpture was then cast in silicone and finished with the fur coat resembling a European grey wolf, as advised by experts. The resulting model gives us a fascinating glimpse at this ancient animal.“

The initial 3D print of the skull was itself produced using a CT scan carried out by the staff of the Diagnostic Imaging Service at Edinburgh University’s Royal School of Veterinary Studies. A lot of things have changed over the last four millennia. The human love of dogs isn’t one of them. While this wolfish dog might not resemble many of the breeds known and loved today, it does give us a glimpse at the beginnings of what turned out to be a beautiful friendship.

It’s not about leaves in tall trees.
Up Next
Neuropsych