At the center of the Milky Way, about 25,000 light years away, is a faint source of radio noise. It’s huge, estimated to weigh the equivalent of the 4.14 million suns. Astronomers have long suspected it’s a supermassive black hole, and they’ve named it “Sagittarius A*.” This week, the European Southern Observatory (ESO) announced that an international collaboration led by Reinhard Genzel of the Max Planck Institute for Extraterrestrial Physics (MPE) has collected the most definitive proof that this is exactly what Sagittarius A* is.

While astronomers can’t directly observe a black hole — light doesn’t escape it — they might, however, be able to see some of what goes on around one. Genzel and other scientists across the globe collected information regarding a small star called “S2” and the belt of gas, or accretion disc, that spin around Sagittarius A*. It’s in the interaction between the two that the new discovery lies, and it was made possible by a breakthrough in imaging. 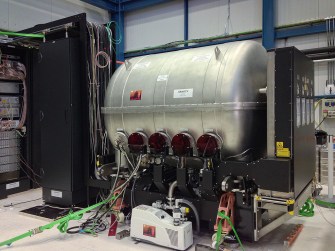 The ESO has a four-telescope array, the Very Large Telescope (VLT) of the Paranal Observatory, rising 2635 meters above sea level in Chile’s Atacama Desert. The amazing device that ultimately allowed the team to confirm Sagittarius A*’s identity leverages the Paranal telescopes. It’s called “GRAVITY,” and it combines all four in a single interferometer that has the resolution of a single mirror resolution of a single mirror 130 meters in diameter. “All of the sudden, we can see 1,000 times fainter than before,” said Genzel when GRAVITY went into use. 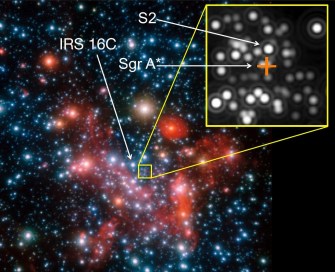 S2 and the redshift

Every 16 years, a young blue star dubbed “S2” or S-02″completes an elongated orbit that brings it perilously close to Sagittarius A*, about 11 billion miles.

Many scientists feel that black holes — of which Einstein himself was unconvinced — are predicted by general relativity. (They were only finally confirmed a couple of years back when two black holes collided.) Einstein’s theory, though, also predicts that if S2 is indeed orbiting a black hole, the speed of the light waves bouncing off it when it draws Sagittarius A*near should slow down, shifting the light it reflects to a more reddish hue.

In July of this year, Genzel’s team announced that they had observed via GRAVITY the center of the Milky Way, and had seen the predicted redshift, allowing them to pinpoint S2’s closest approach to Sagittarius A*. New York Times reports that as the results were being read off at the Munich announcement, the room broke out into applause.

Simulation of Material Orbiting close to a Black Hole

Also spinning around Sagittarius A* is an accretion disc that travels at nearly 30 percent the speed of light, zooming 150 million miles around the object every 45 minutes. According to relativity, whenever S2 — or any hot object — reaches its innermost, or stable, orbit, bits of it should cross the event horizon and be instantly vaporized as they fall into the black hole, sparking brief infrared flares.

Thanks to GRAVITY, the MPE scientists have been able to see that this actually happens at S2’s closest fly-by. “GRAVITY’s tremendous sensitivity has allowed us to observe the accretion processes in real time in unprecedented detail,” another MPR scientist, Oliver Pfuhl, tells ESO. “It’s mind-boggling to actually witness material orbiting a massive black hole at 30 percent of the speed of light.”

The predicted flares were spotted, actually, as the MPE team was observing S2 in the research that led to July’s announcement, though it took until now to prepare supporting materials for publication. “We were closely monitoring S2, and of course we always keep an eye on Sagittarius A*,” Pfuhl recalls. “During our observations, we were lucky enough to notice three bright flares from around the black hole — it was a lucky coincidence!” 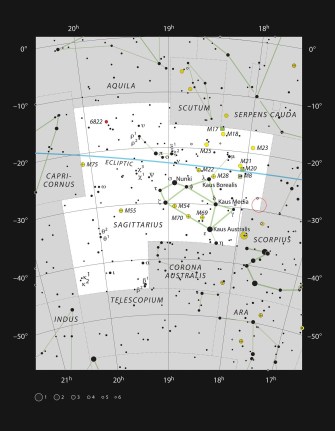 Genzel refers to the discovery of the flares as a “resounding confirmation of the massive black hole paradigm.” Astronomers believe that black holes likely lie at the core of other galaxies as well, so this announcement has far-reaching implications. “This always was one of our dream projects but we did not dare to hope that it would become possible so soon,” he concludes.

The first human that isn’t an Earthling could be in our lifetime.
▸
5 min
—
with
Robert Curbeam
Up Next
The Present

The blockchain phone is coming… but what does this mean?

What is a blockchain phone, and why would anyone want one?