Something went wrong on the Ingenuity Mars Helicopter’s sixth flight. Not to worry, though: the copter is fine. The story of what went wrong and why it’s okay now reminds us once again just how impressively smart space engineers have to be and usually are. 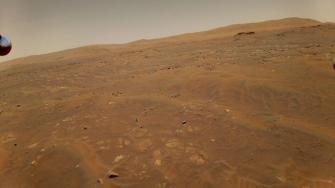 An image taken by the helicopter during its sixth missionCredit: NASA / JPL-Caltech

The helicopter was sent aloft to take stereo images of a region of interest. The plan was for it to ascend to a height of ten meters and then travel at a speed of four meters per second for 150 meters to the southwest, capturing images as it flew. Next, it was to travel 15 meters to the south with its camera facing westward, and then finally 50 meters to the northeast where it was to land.

How the helicopter knows where it is 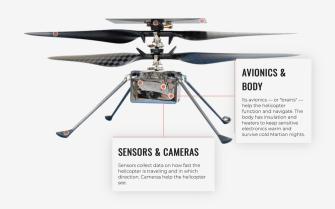 The helicopter’s navigation system has two parts. The first is an onboard inertial measurement unit (IMU). This device keeps track of the helicopter’s acceleration and rotation. It monitors these aspects of its motion 500 times per second, allowing the craft to estimate where it is, how fast it’s traveling, and its attitude. (IMUs also feature prominently in the navigation systems of autonomous cars back here on Earth.)

However, this is just an estimate, and since small errors build up over time, the IMU alone is not enough to keep the helicopter on course. A second system confirms the IMU estimate or alerts the craft that something has gone wrong.

This system involves a downward-pointing camera that takes time-stamped images of the ground beneath the helicopter during most of a flight. It fires each image directly to the craft’s navigation system, where:

This all happens incredibly quickly — the down-facing camera takes 30 images per second.

Apparently, for unknown reasons, about 54 seconds into the flight, a glitch occurred in the system responsible for transferring the down-facing images to the navigation system, and one single image got lost along the way. This had the effect of throwing the timestamp of all of the subsequent images off.

For the rest of the flight, the Ingenuity Mars Helicopter was unsure where it was. Its weird behavior was a frantic — not really, it’s a machine — attempt to respond as the discrepancy compounded over time.

Anticipating such surprises, the designers built into the algorithm a stability margin that allows the craft to remain relatively stable even if it encounters a significant number of errors, as happened here. As chief pilot of the craft Håvard Grip puts it: “This built-in margin was not fully needed in Ingenuity’s previous flights, because the vehicle’s behavior was in-family with our expectations, but this margin came to the rescue in Flight Six.”

The system also had one final trick up its sleeve that allowed the confused craft to land safely. When a craft is close to the Martian surface, either landing or taking off, a lot of dust gets kicked up. Concerned that flying dust would create problems for the algorithm, the craft is programmed to ignore the images once the craft’s altitude is one meter or less.

In this case, that meant that the helicopter set aside the confused image system during landing, relying solely on its IMU. We’ll give Grip the final word:

“In a very real sense, Ingenuity muscled through the situation, and while the flight uncovered a timing vulnerability that will now have to be addressed, it also confirmed the robustness of the system in multiple ways.”

The science fiction dream of a traversable wormhole is no closer to reality, despite a quantum computer’s suggestive simulation.
Starts With A Bang

It’s not only the gravity from galaxies in a cluster that reveal dark matter, but the ejected, intracluster stars actually trace it out.
Hard Science

Compared to Earth, Mars is small, cold, dry, and lifeless. But 3.4 billion years ago, a killer asteroid caused a Martian megatsunami.
Up Next
Strange Maps

Turn any place on earth into a New York street corner