Life, at least as we know it, requires a relatively radiation-free place to thrive and a breathable atmosphere, attributes we enjoy here on Earth thanks to the planet’s magnetosphere — a massive, comet-shaped bubble of a magnetic field that surrounds the planet and protects us from cosmic and solar particles. This field, produced by the motion of electrically charged molten iron in our planetary core, also prevents our atmosphere from being torn away by the charged particles, or “solar wind,” bombarding us from the sun.

The comet shape gives you a sense of the kind of robust protection it provides. Buffeted on the side facing the sun due to solar wind, it is compressed to 6-10 times the Earth’s radius. On the other side facing away from the sun, it is about 60 times the radius.

Given its obvious importance to our survival, there has been some alarm that the Earth’s magnetosphere has weakened by about 9 percent over the last two centuries. There is also some concern that Earth’s magnetic poles may be about to flip — as it is, the North Pole has been moving toward Russia for some time. Now, however, a new study that uses an innovative means of measuring large periods of time suggests that there is no need to worry. The weakening of the planet’s magnetic field happens every 200 million years or so. 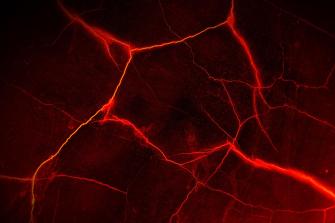 Long-term study of the magnetosphere’s history is tricky because so much of the ancient material that might allow scientists to dig deep into the past is continually being churned to bits by movement within the Earth. There are big chunks of time without representation in the geologic record.

The authors of the study at the University of Liverpool have developed a technique they call “microwave paleomagnetic analysis.” This, combined with thermal analysis, allowed them to learn a great deal from two lava flows in eastern Scotland. They verified the validity of their technique by reanalyzing samples collected by others that were from a period 200 to 500 million years ago. Their measurements were in agreement.

Clues in the lava flows

Lead author Louise Hawkins says, “Our findings, when considered alongside the existing datasets, supports the existence of an approximately 200-million-year long cycle in the strength of the Earth’s magnetic field related to deep Earth processes. As almost all of our evidence for processes within the Earth’s interior is being constantly destroyed by plate tectonics, the preservation of this signal for deep inside the Earth is exceedingly valuable as one of the few constraints we have.”

In comparing their conclusions with Russian and Canadian researchers, the authors of the study found that it all chronologically fits together nicely.

The research led to the identification of a period the team is referring to as the “Mid-Palaeozoic dipole low (MPDL).” It was a time, the lava flows revealed, between 332 and 416 million years back when the planet’s magnetic field was less than 25 percent of what we have today. This period directly precedes the Kiaman Reverse Superchron, a period of magnetic stability that lasted about 50 million years.

Importantly, says Hawkins, “Our findings also provide further support that a weak magnetic field is associated with pole reversals, while the field is generally strong during a Superchron, which is important as it has proved nearly impossible to improve the reversal record prior to 300 million years ago.”

While the research makes clear that our currently weakening magnetic field is not an unprecedented event, that does not mean that periods of lower magnetism have no consequences.

A study of the Devonian-Carboniferous mass extinction suggests that it occurred during a period magnetically similar to the MPDL, when Ultraviolet-B levels were elevated. That study proposed that UV-B levels were a “kill mechanism” at that time.

Then there is that possible pole reversal. If it happens, it is unclear what to expect. It is entirely possible it will baffle our electronics as well as animals that navigate using the Earth’s magnetic gridlines. It might also cause more cosmic and solar radiation to get through to Earth’s surface. Though a geomagnetic reversal takes thousands of years, it is never too early to ponder what a new North would look like.

Researchers hypothesize that these exoplanets could support the development of alien life.
Hard Science

Scientists track down a puzzling early burst of oxygen on Earth.
Up Next
The Past

Searching for happiness in the midst of personal or societal crises are nothing new.