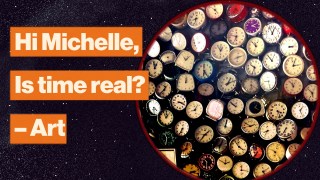 Is time real or is it an illusion?

Light exists outside of time.
▸
5 min
—
with
Michelle Thaller

MICHELLE THALLER: Art, you've asked one of the most important questions in modern physics. Is time real or is it an illusion? Well, time is certainly real, but the question is, what do we mean by the word time? And it may surprise you that physicists don't have a simple answer for that.

One thing we are absolutely sure of is that the rate of time does change. Time is not just simply a progression, like a river that keeps flowing. It can change depending on how fast you're moving through space. And this is Einstein's special theory of relativity. The idea is that the faster you go, the slower time appears to be moving for you if other observers look at you going by. So if you're on a spaceship going half the speed of light, you don't perceive any change yourself. You perceive time going ahead just as you always have felt it, but if people look at you in the spaceship going by. And not just you moving, but the vibrations of your atoms. Any way you can possibly measure time is slowed down. As you go faster and faster and approach the speed of light, your time slows down more and more.

And the amazing thing is that at the speed of light, time does not progress at all. So this is something that has always kind of freaked me out because there's light in this room right now. That there's light bouncing off my body. That's the way you can see me. I can look up at the sky and see the Sun. Light does not experience time. It's something that actually exists outside of time, and yet we still interact with it. And I've never found the right way to think about that. This effect is not just a theory. This is incredibly well measured every single day. We accelerate things in particle accelerators to very close to the speed of light. and all the processes in physics slow down as that happens.

Applications to this, too. For example, the global positioning satellites that allow you to take your location from your smartphone. Those satellites are going overhead very, very fast. They're going at nearly 20,000 miles an hour. And it turns out that that's fast enough that their time is slowed down. They're actually in a slightly different time frame than we are. And we have to account for that. We have to correct for that mathematically. Otherwise, you would not get the right location. So we know that time slows down.

We observe this happening all around us. It was a really hard thing in modern physics about 100 years ago for people to let go of the idea that time just has a rate that it flows-- that, in fact, it can flow at different rates for different observers. Then there's the question of what is time related to space? And you may have heard that Einstein talked about a concept called space-time. He didn't believe that space and time were separate things. We certainly perceive them differently in our human brains. We can move through space, but time always seems to go just at one rate and in one direction. But Einstein thought they were part of a fabric. They were woven together. And one of the ways he illustrated this was that you have to adjust space and time so they always kind of balance out. If I am not moving through space-- I'm sitting here still in this chair-- then time just seems to go forward at a natural rate. Time just flows. But if I start going faster and faster, my time slows down. So in a sense, I'm moving through space very fast. So I can't move through time as fast as I might have. The two balance each other, space-time. If you move through space very fast, time begins to slow down, and they become the same thing.

And now something gets even stranger, and that is that Einstein thought that the beginning of the universe-- the big bang-- created all of space and all of time at once in a big whole something-- So every point in the past and every point in the future are just as real as the point of time you feel yourself in right now. Einstein believed that literally. One of his best friends died, and he wrote a letter to this person's wife, talking about how his friend still exists. Time is a landscape, and if you had the right perspective on the universe, you would see all of it laid out in front of you-- all past, present, and future as a whole thing. And he said, your husband, my friend is just over the next hill. He's still there. We can't see him where we are now, but we are on this landscape with him and he still exists just as much as he ever has. Einstein believed that you right now have been dead for trillions of years, but you haven't been born yet. That everything that's happened to you, if you could get the right perspective on the universe, you could see all at once.

So modern physics has required us to really let go of the idea of time as something that just flows. We can measure that it's changing around us all over the place-- satellites, particle accelerators, anything going fast-- and it may be that space and time are the same thing all wrapped up together.

Chores cause conflict. Try managing them like this instead.