Chicken is one of the most consumed meats in the world. The U.S. alone consumes 8 billion chickens per year — about 25 birds per every meat-eater in the country. But just 1,000 years ago, chicken was a relatively rare dish.

New research suggests that a religious edict might have changed that, putting chicken on the menu for millions of people and shaping its evolutionary fate forever. 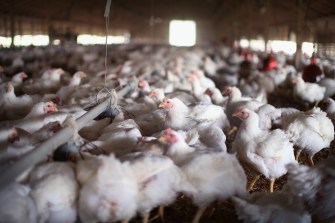 Chickens have been domesticated for millennia. Some scientists think ground zero for domestic chickens was the Indus Valley some 4,000 years ago, but we know for sure that domesticated chickens existed in ancient Egypt, Rome, and, notably, Greece. The ancient Greeks were apparently so inspired by the virility of roosters that they constructed a cockfighting amphitheater in the city of Pergamum so that young soldiers could witness their avian valor.

Still, chickens back then weren’t a common meat source like they are today. Maybe it was because they were, quite literally, a different bird. Chickens were scrawnier and scrappier, more closely resembling the red jungle fowl of Southeast Asia — the chicken’s progenitor. Even up until medieval Europe, chickens seemed to be kept primarily for egg laying, cockfighting, and as decorative lawn ornaments. 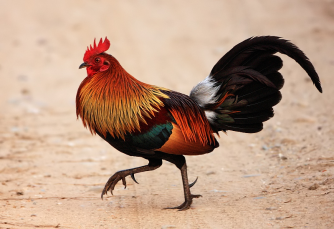 But fasting laws changed the bird’s fate. In the 10th century, the Catholic Church passed a religious edict as part of the Benedictine Reform that banned the consumption of four-legged animals on fasting days, which totaled 130 days of the year. Unfortunately for the two-legged chicken, people began to eat more poultry. And scientists have actually found tangible evidence of this dietary shift, in the form of bones.

Zooarchaeologist Naomi Sykes of the University of Nottingham and her colleagues have spent years counting the number of chicken bones at various archaeological sites around Europe. Her team discovered that the number of chicken bones in sites had doubled from about the year 950 to 1000 — the same time as the reforms. So, why do researchers think this increased consumption shaped the chicken’s evolution?

In 2010, evolutionary biologist George Larson and his colleagues studied the genomes of eight different populations of modern chickens. They found that all modern chickens carry a dominant version of a gene called the thyroid stimulating hormone receptor (TSHR). This variant allows the birds to lay eggs year-round, and seems to have helped make the birds become more plump over time. But, curiously, this gene variant was not widespread among domestic chickens in ancient cultures. The Benedictine Reform seems to have changed that. 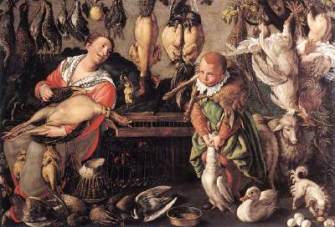 Larson and his colleagues posit that as 10th-century Europeans suddenly began to breed more chickens, they inevitably selected the reproduction of meatier birds who laid eggs year-round. In other words, they began selecting for the TSHR variant and changed the genetic structure of chickens in the evolutionary blink of an eye.

“It speaks a lot about the effects humans’ decisions have on the environment—even a political or religious decision really can impact the biology of animals,” said Ludovic Orlando, a geneticist at the University of Copenhagen.

The findings also provide a different way of looking at the process of domestication.

“It’s cool because it shows we’re moving beyond thinking of domestication as a single event… you can see the psychology of early farmers over time who go from just wanting to make a wild variant grow, to making the damn thing tasty,” said Tom Gilbert, a geneticist at the University of Copenhagen.

Although it’s likely that the Benedictine Reform played a major rule in shaping the evolution of the modern chicken, there were likely other forces at work, too. The processes of urbanization, more efficient agricultural practices and a warmer climate might have also played a part, said study author Anders Eriksson.

Bears, chimps, or humans? A track of five poorly preserved footsteps at Laetoli has puzzled paleontologists for decades. Now, a research paper from Nature claims to have solved the mystery.
13.8

The early colonists thought they were being pulled by God into a void left by plague.
Up Next
Surprising Science

There are 2 dimensions of time, theoretical physicist states

If it proves true, it could heal the rift between quantum mechanics and the theory of relativity.