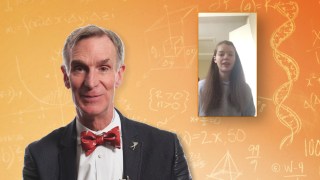 Methane gases from livestock production is contributing to the acceleration of global warming. Is a plant-based diet a smart way for individuals to curb the effects of climate change?
▸
3 min
—
with
Bill Nye, The Science Guy

Make all the jokes you want, says Bill Nye, but methane is a very potent greenhouse gas, and as Earth’s population increases so too does the size of the meat industry that caters to it. Demand for meat is growing steeply in developing nations, according to the Heinrich Böll Foundation, and the methane emitted by livestock is undoubtedly contributing atmospheric gases and accelerating global warming. So is a plant-based diet the answer, slashing the demand placed on the meat and dairy industries? Nye finds himself choosing to eat more and more vegetarian dishes, so while he hasn’t gone ‘full vegan’ yet, his awareness of the problem has sparked a reductionist diet. Nye also mentions that agricultural scientists may soon find themselves under public pressure to reduce methane output. One way they might do that? Changing the bacteria in livestock’s stomachs so they metabolize food with less methane byproduct. So we could bio-engineer the stomachs of other animals, or we could simply reduce the amount of animal products that go into our own.

Erin: Hey Bill.  I’m Erin and I’m from Scotland. I went vegan after I watched documentaries like Before the Flood and Cowspiracy. It presented me with lots of terrifying information such as that from the FAO which suggests that 14.5 to 18 percent of the world’s global emissions are due to animal agriculture. However, Worldwatch suggests it’s closer to 51 percent.  I was wondering if you knew why there was such a difference between these two figures and whether you think that adopting a vegan diet is the best thing we can do as individuals for the planet.

Bill Nye: Erin, you raised a very good point. I don’t know why the two figures in those two studies, the documentary and the—was it a scientific paper?—are discrepant, but it probably has to do with trying to assay or figure out how much greenhouse gas is created by cattle or other livestock.

And the problem, everybody, is that livestock eat plants; then bacteria in their livestock stomachs metabolize the plant material into methane, natural gas. And you can make all the jokes you want, but methane is a very strong greenhouse gas.

The first place I’d look to find the reasons for the discrepancy between the two figures is in the amount of greenhouse gas supposed to come from a cow or a sheep or goat.

So with humans, the human population getting so big that we are raising so many farm animals, it’s very reasonable that we’re creating a tremendous amount of extra methane that wouldn’t otherwise be there in the atmosphere. And that is causing global warming and climate change to happen more rapidly than would otherwise.

However, if humans weren’t there animals would be all over the place anyway; it’s not clear that they’d be in these concentrations though.

It could be a difficult thing to measure, but it’s also reasonable that agriculture researchers are going to produce or breed farm animals that produce less methane by changing the bacteria that are in their stomachs that metabolize plant matter.

To get all the way down to a plant based diet might be tricky for a lot of people. However, it seems like a good idea. Check in with me in a few months, because I noticed that my diet is becoming increasingly vegetarian, and so in the next little while I may be all the way over. “Why aren’t you now Bill?” That’s a great question. I’m working it—I’m working on it.

It’s a very interesting question and and an important one. And literally a huge one because we’re talking about the Earth’s atmosphere. Thank you Erin.