We’ll never know the first human to call a dog his best friend. Nearly 15,000 years ago dogs were buried next to humans; our canine pals were on the hunting-gathering circuit with us. By the time we settled into cities they were willing allies, given the bonds forged by then. As in any relationship, we give a little and take a little.

Apparently we’re taking even more than we thought, according to new research published in Scientific Reports. Dog owners who live alone are 36 percent less likely to suffer from cardiovascular disease than non-dog owners, while multiple-person households enjoy a 15 percent decrease in heart problems.

This is no small-scale study. A team led by Mwenya Mubanga, who works in the Department of Medical Sciences in Molecular Epidemiology and Science for Life Laboratory at Uppsala University, analyzed medical records from more than 3.4 million residents in Sweden. They compared those records against pet ownership records, as well as self-reported health and lifestyle habits from over 34,000 citizens.

The group the team ended up focusing on included people between ages 40 and 80, with a mean average of 57, of which 13 percent were dog owners. Since cardiovascular disease accounted for 45 percent of all deaths in Europe in 2016, researchers searched for a correlation between dog ownership and rates of heart problems. In their words:

Dogs may be beneficial in reducing cardiovascular risk by providing a non-human form of social support and increasing physical activity. Dog ownership has been reported to be associated with alleviation of social isolation and improved perception of wellbeing, particularly in single persons and the elderly.

Interestingly, people who own hunting dogs, such as terriers and retrievers, experience the lowest rates of cardiovascular disease. The exact link is unknown. Active people could choose these dogs to work out with more often, or those dogs might inspire people to start running up mountains and across fields. Given the amount of time hunting dogs need to run, it makes sense the human would be influenced as well.

Correlation, of course, does not imply causation, a fact researchers are aware of. Yet beyond exercise they speculate that psychological comfort could be another important factor. Many studies have shown the negative effects of loneliness on a person; strong social networks—real, live ones, not online—are a necessary component of physical and mental health. This could be why rates of cardiovascular problems were markedly lower for those who live alone. The canine is truly their best friend.

This makes sense, given that a 2015 study discovered that extended eye contact releases oxytocin in the brains of both dogs and humans. We’ve even evolved together biologically, with genes for digestion, metabolism, neurological processes, and cancers occurring in dogs and humans simultaneously.

According to the ASPCA, 6.5 million companion animals enter shelters every year in America, with dogs slightly edging out cats in number. Of that pool, 670,000 dogs and 860,000 cats are euthanized. While those numbers are fortunately down since 2011, that’s still a startlingly large number of animals who can’t find homes. Given the health benefits to humans, it’s a perfect season to visit a shelter. Your heart will thank you for it. 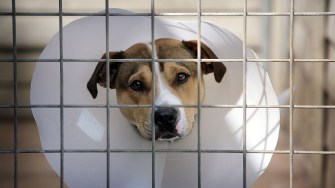 The first human that isn’t an Earthling could be in our lifetime.
▸
5 min
—
with
Robert Curbeam
Up Next
Technology & Innovation

Physicists Find a Way Information Can Escape From Black Holes

Physicists propose a new kind of space structure that can allow information to escape from black holes.