Typically, one imagines a black hole as sort of a gigantic cosmic pit that sucks in everything around it. But physicists say a new kind of space structureis possible that allows some information to escape black holes.

Previously, wormholes, theoretical structures predicted by the theory of general relativity (as Einstein-Rosen bridges), have been considered as possible ways to escape black holes. But the physics of such potential tunnels between locations in space-time never panned out. The wormholes would collapse immediately upon forming. So scientists theorized that may be some advanced civilization could find a technology, perhaps utilizing an exotic material to stabilize the wormholes. Basically, pure sci-fi.

But now, physicists proposed that a new type of wormhole is possible, called traversable. It would be be free of exotic material and could stay open on its own.

The work on traversable wormholes was carried out by Ping Gao and Daniel Jafferies of Harvard University and Aron Wall of Stanford University. According to their 2016 paper, a repulsive negative energy can be generated by a special quantum connection between the black holes on both sides of the wormhole. With the right kind of connection, something could go from being in one black hole into the other one.

If this kind of wormhole is possible, it means there could be interiors to black holes and that you could theoretically get out of one and live to tell about it.

Interestingly, the math involved in the work by the physicists on the wormholes is similar to the process called quantum teleportation, which can be demonstrated in a lab.

Here’s how a traversable wormhole would work, in a graphic from Quanta Magazine: 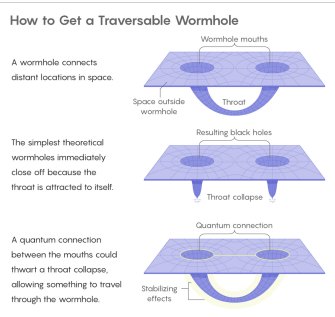 In case you’re wondering, traversable wormholes do not seem to function as time machines. Rather they support the concept of unitarity – that no information is ever lost. As John Preskill, a black hole expert from Caltech noted to Quanta Magazine, the new wormholes also protect “what we call ‘black hole complementarity,’ which means that the interior and exterior of the black hole are not really two different systems but rather two very different, complementary ways of looking at the same system.”

It bears noting that no actual wormholes have been discovered yet.

Related
L&D strategy
Best practices for a needs analysis [Templates included]
Conducting a thorough needs analysis requires care, curiosity, and open-mindedness.
Neuropsych
Memory and the benefits of forgetting
Forgetfulness isn’t always a “glitch” in our memories; it can be a tool to help us make sense of the present and plan for the future.
The Learning Curve
5 Stoic quotes to help you through difficult times
“We suffer more often in the imagination than in reality.”
Starts With A Bang
The good reasons scientists are so hostile to new ideas
Many people out there, including scientists, claim to have discovered a series of game-changing revolutions. Here’s why we don’t buy it.
The Present
Climate change is altering the chemistry of wine
Smoke taint from wildfires is gross, even to wine amateurs.
Up Next
Politics & Current Affairs
How the end of net neutrality could change your experience of the internet
Federal Communications Commission Chairman Ajit Pai has announced a proposal to repeal net neutrality regulations set forth by the Obama administration in 2015.