The public finally had a chance in 2017 to see some of the government’s tightly guarded UFO footage — never mind the sudden admission that it existed in the first place. The handful of clips that were de-classified were eye-popping, depicting flying somethings with ridiculous maneuvering capabilities, far beyond anything we’d seen in human craft. Sure, we wondered where they came from and who was driving those things, but just as urgent was a desire to wrap our heads around how they were doing the things they were doing. Apparently, the Department of Defense (DOD) was right there with us, because their recently published reading list suggests their suspicions went in some seriously sci-fi directions. 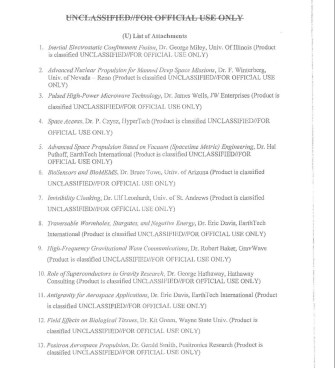 We’re seeing this list because of a Freedom of Information Act (FOIA) request made of the Advanced Aerospace Threat Identification Program by Steven Aftergood, director of the Federation of American Scientists’ Project on Government Secrecy. It was released to Congress in January 2018.

At the top, as you can see, it’s somehow both “UNCLASSIFIED” and “FOR OFFICIAL USE ONLY.” And, if you’re not confused yet, both phrases are crossed out.

Hugh Marlowe and Joan Taylor in Earth vs. the Flying Saucers (1956)

What’s on this reading list jumps right into the theoretical and even quasi-fictional (Star Trek’s warp drive?). After all, any explanation for both the presence of UFOs and their observed behavior would have to solve two currently unanswerable riddles.

The DOD seems to be looking at this question from a variety of angles, also including the effects of space travel on biological tissue, communications technologies, and energy storage. They’re also wondering, apparently, if they’re from space or are somehow home-grown. Also, um, weapons?

Many of the books listed appear to themselves be classified and thus unavailable to the general public. It’s also worth noting that some of the publications are by NASA, which demonstrates their out-of-box thinking, too.

Image from The Hitchhiker’s Guide to the Galaxy

How would alien vehicles traverse vast stretches of space? As Douglas Adams famously wrote in Hitchhiker’s Guide to the Galaxy:

“Space is big. You just won’t believe how vastly, hugely, mind-bogglingly big it is. I mean, you may think it’s a long way down the road to the chemist’s, but that’s just peanuts to space.”

Care for some light reading on confinement fusion? How about vacuum engineering or aneutronic fusion propulsion? Positron propulsion, and negative mass propulsion? Star Trek’swarp drive? Yup, and we’ll throw in inter-dimensional travel, too: Warp Drive, Dark Energy, and the Manipulation of Extra Dimensions. Speaking of extra-dimensional shortcuts, how about Traversable Wormholes, Stargates, and Negative Energy? And, of course, quantum entanglement, always a party favorite.

The DOD’s interests in this area have to do with a wide range of elements, from materials — Biomaterials, metamaterials, Metallic Glasses — to methods of control, such as Metallic Spintronics, and antigravity. There’s also the disturbing Technological Approaches to Controlling External Devices in the Absence of Limb-Operated lnterfaces. And you know how UFOs can sometimes suddenly disappear? Sit down, Hagrid: The DOD read Invisibility Cloaking.

And then there are the observations of multiple craft doing “impossible” things. How are they all working together? You could read Cognitive Limits on Simultaneous Control of Multiple Unmanned Spacecraft before lights-out tonight if it wasn’t classified.

We’ll just say this: The DOD has lasers on its mind. There are a few publications here on high-powered lasers. Also maybe microwaves.

It’s unlikely that the entire DOD takes UFOs this seriously, or is so obviously well-versed in science fiction as to even consider some of these angles. Clearly, though, at least some members of the Advanced Aerospace Threat Identification Program have spent as many hours immersed in space opera as we have. This list reveals two startling things: Science may be catching up to fiction. And maybe us nerds aren’t so crazy after all.