Imagine if we could cut paths through the vastness of space to make a network of tunnels linking distant stars somewhat like subway stations here on Earth? The tunnels are what physicists call wormholes, strange funnel-like folds in the very fabric of spacetime that would be—if they exist—major shortcuts for interstellar travel. You can visualize it in two dimensions like this: Take a piece of paper and bend it in the middle so that it makes a U shape. If an imaginary flat little bug wants to go from one side to the other, it needs to slide along the paper. Or, if there were a bridge between the two sides of the paper the bug could go straight between them, a much shorter path. Since we live in three dimensions, the entrances to the wormholes would be more like spheres than holes, connected by a four-dimensional “tube.” It’s much easier to write the equations than to visualize this! Amazingly, because the theory of general relativity links space and time into a four-dimensional spacetime, wormholes could, in principle, connect distant points in space, or in time, or both. 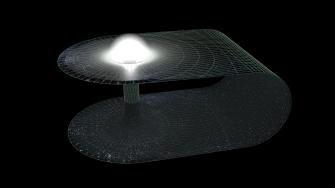 The idea of wormholes is not new. Its origins reach back to 1935 (and even earlier), when Albert Einstein and Nathan Rosen published a paper constructing what became known as an Einstein-Rosen bridge. (The name ‘wormhole’ came up later, in a 1957 paper by Charles Misner and John Wheeler, Wheeler also being the one who coined the term ‘black hole.’) Basically, an Einstein-Rosen bridge is a connection between two distant points of the universe or possibly even different universes through a tunnel that goes into a black hole. Exciting as the possibility is, the throats of such bridges are notoriously unstable and any object with mass that ventures through it would cause it to collapse upon itself almost immediately, closing the connection. To force the wormholes to stay open, one would need to add a kind of exotic matter that has both negative energy density and pressure—not something that is known in the universe. (Interestingly, negative pressure is not as crazy as it seems; dark energy, the fuel that is currently accelerating the cosmic expansion, does it exactly because it has negative pressure. But negative energy density is a whole other story.)

If wormholes exist, if they have wide mouths, and if they can be kept open (three big but not impossible ifs) then it’s conceivable that we could travel through them to faraway spots in the universe. Arthur C. Clarke used them in “2001: A Space Odyssey”, where the alien intelligences had constructed a network of intersecting tunnels they used as we use the subway. Carl Sagan used them in “Contact” so that humans could confirm the existence of intelligent ETs. “Interstellar” uses them so that we can try to find another home for our species.

If wormholes exist, if they have wide mouths, and if they can be kept open (three big but not impossible ifs) then it’s conceivable that we could travel through them to faraway spots in the universe.

Two recent papers try to get around some of these issues. Jose Luis Blázquez-Salcedo, Christian Knoll, and Eugen Radu use normal matter with electric charge to stabilize the wormhole, but the resulting throat is still of submicroscopic width, so not useful for human travel. It is also hard to justify net electric charges in black hole solutions as they tend to get neutralized by surrounding matter, similar to how we get shocked with static electricity in dry weather. Juan Maldacena and Alexey Milekhin’s paper is titled ‘Humanly Traversable Wormholes’, thus raising the stakes right off the bat. However, they are open to admitting that “in this paper, we revisit the question [of humanly traversable wormholes] and we engage in some ‘science fiction.'” The first ingredient is the existence of some kind of matter (the “dark sector”) that only interacts with normal matter (stars, us, frogs) through gravity. Another point is that to support the passage of human-size travelers, the model needs to exist in five dimensions, thus one extra space dimension. When all is set up, the wormhole connects two black holes with a magnetic field running through it. And the whole thing needs to spin to keep it stable, and completely isolated from particles that may fall into it compromising its design. Oh yes, and extremely low temperature as well, even better at absolute zero, an unattainable limit in practice.

Maldacena and Milekhins’ paper is an amazing tour through the power of speculative theoretical physics. They are the first to admit that the object they construct is very implausible and have no idea how it could be formed in nature. In their defense, pushing the limits (or beyond the limits) of understanding is what we need to expand the frontiers of knowledge. For those who dream of humanly traversable wormholes, let’s hope that more realistic solutions would become viable in the future, even if not the near future. Or maybe aliens that have built them will tell us how.

Tags
cosmosextraterrestrial lifephysicssciencespacetimeuniverse
In this article
cosmosextraterrestrial lifephysicssciencespacetimeuniverse
Related
The Well
This is what the fourth dimension looks like
Left–Right, Back–Forth, Up–Down. What’s the fourth dimension?
▸
3 min
—
with
Brian Greene
The physics of entropy and the origin of life
How did complex systems emerge from chaos? Physicist Sean Carroll explains.
▸
6 min
—
with
Sean Carroll
The Universe in 90 minutes: The Multiverse, time, free will, God, & more
Everything you ever wanted to know about the Universe, explained by physicist Sean Carroll.
▸
1:33:47 min
—
with
Sean Carroll
Life
“I went to space and discovered an enormous lie”
What astronaut Ron Garan saw in space changed his life forever – here’s what it taught him.
▸
8 min
—
with
Ron Garan
The Well
The 3 “demons” that haunted legendary scientists
Darwin, Descartes, and Maxwell all believed in these science ‘demons.’
▸
7 min
—
with
Jimena Canales
Up Next
Neuropsych
Study: Does the label “straight” worsen perceptions of gay people?
A new study explores how using positive labels to describe a majority group may negative impact perceptions of minority groups.