Noting a “surprising” lack of research on this question, a new study titled “If I Am Straight You Are Askew”: Labelling Heterosexuals as Straight Worsen Gay Men’s Perception” (published in The Journal of Sex Research) aimed to fill the gap by exploring whether referring to heterosexual people as “straight” produces negative perceptions of gay men.

The researchers behind the recent study noted that those prior findings proved “true not only in the European language but also in Chinese, Arabic, and Russian, thus suggesting this relation to be spread in different cultural contexts.”

“Giving a look at the dictionary, straight is defined as continuing in one direction without curving (adv.), being without bend (adj.), being honest and respectable (adj.) and being heterosexual (adj.),” study author Simona Sacchi , a professor at the University of Milano-Bicocca, told PsyPost.

“For this reason we decided to investigate the possible impact of this association between straightness (related to morality) and heterosexuality on social perception and prejudice towards sexual minorities.”

To examine how the word “straight” might affect heterosexual participants’ perceptions of gay men, Sacchi and her colleagues conducted three studies involving 275 English-speaking and 131 Italian-speaking participants. The researchers collected data on participants’ levels of religiosity and prejudice against gay men, as measured by the Modern Homonegativty Scale. 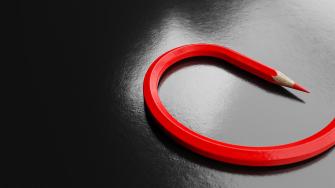 Then, both groups were shown a fictitious Facebook profile of a man named Chris, who was described as gay. The researchers asked participants to rate their impressions of Chris. The results showed that participants who had been recently exposed to the word “straight” tended to report worse perceptions of Chris, however this was true only among participants with higher levels of religiosity and prejudice.

The researchers conducted the same study again, but this time they included a third group of participants who read a profile of James that didn’t describe him as “straight” or “heterosexual.”

The second study produced similar results: Highly religious participants reported worse impressions of Chris after being exposed to the label “straight,” although in general there wasn’t a significant difference between the three groups (“heterosexual,” “straight” and control).

The first two studies involved participants who commonly used the word “straight” to refer to heterosexual people. But what about cultures that don’t use such language? 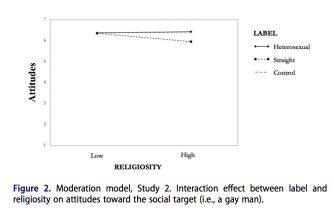 The researchers decided to conduct a third study in Italy, where people don’t use the word “straight” to refer to heterosexual people. In the study, all participants were asked to classify 20 pictures. Ten pictures showed heterosexual couples, while the other ten showed non-romantic partners, such as a pair of police officers.

“The word “gialli” was selected because this is a common, neutral adjective, related to a visual feature (in this case, color instead of shape) and unrelated to sexual orientation,” the researchers wrote.

The researchers said their study is the first to examine the consequences of using positive language to describe majority groups, and that they hope the results will lead to “fruitful” future research to better understand the effects of positive labeling.

“We should remember that modern prejudice is often subtle, indirect, invisible to the perpetrator, and revealed more by ingroup favoritism than explicit outgroup derogation,” Sacchi told PsyPost. “In contemporary society, ingroup-directed favoritism and accentuated positive feelings, as sympathy and admiration, toward ingroup members could be the ‘modern’ basis for discrimination.”

Fiona Broome remembered Nelson Mandela dying in prison in the 1980s (he didn’t). Oddly, many people had the same false memory.
Up Next
The Past

Mysterious “Plain of Jars” in Laos has been dated

After years of speculation a team of researchers has pinpointed the age of this ancient mystery.