The stone jar sites scattered around Laos are considered the most unique and important archaeological finds in all of Southeast Asia. In total, over 90 sites have been identified, with each site containing between one and 400 jars, some of which weigh up to 20 tons.

Carved of rock and cylindrically-shaped, the predominantly undecorated jars—only one features a “frogman” etched into its exterior—vary in shape and size, though they are predominantly constructed of sandstone. Other materials used include breccia, conglomerate, granite, and limestone. The jars range from one to three meters tall.

The purpose of these jars has long been debated. Given their proximity to funerary grounds, they might have served a ritual purpose or merely marked where the dead were buried. They might have housed cremated remains. A more pragmatic purpose has been put forward: to collect monsoon rainwater.

The Plain of Jars, as this network is known, was heavily bombed by the United States Air Force in the 1960s. In fact, the USAF dropped more bombs on Laos (specifically, these jar sites) than in the entirety of World War II—a total of 262 million cluster bombs. Some 80 million remain undetonated, making them a daily threat to the population of Laos today.

Protective measures are now being taken. In 2019, UNESCO designated a group of 11 of these regions as a World Heritage Site. The organization notes that these sites represent a historical crossroads between the Mun-Mekong system and the Red River/Gulf of Tonkin system, noting that beyond ritual purpose, they could have been utilized by travelers in some capacity—hence the rainwater theory.

After decades of speculation and research, a team led by two Australian researchers and one Laotian researcher have dated these jars. Using a fossil-dating technology known as Optically Stimulated Luminescence (OSL), the team examined sediment from underneath jars at 120 different locations, discovering that they were constructed sometime between 1240 and 660 BCE. 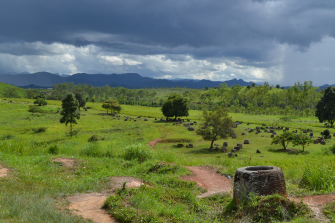 Dr. Louise Shewan from the University of Melbourne explains,

“With these new data and radiocarbon dates obtained for skeletal material and charcoal from other burial contexts, we now know that these sites have maintained enduring ritual significance from the period of their initial jar placement into historic times.”

How the jars were moved around Laos remains unknown. As with other ancient mysteries—the various henges around Scotland and England; the interconnected network of cities in the Harappan civilization—understanding the rituals associated with and technologies used to create awe-inspiring monuments remains a dream for many archaeologists.

The team behind this research plans on examining more samples from these Laotian jars—a particularly daunting challenge considering less than 10 percent of jar sites have been cleared of American explosives. Shewan is excited about the prospects of what further testing could reveal, however.

“We expect that this complex process will eventually help us share more insights into what is one of Southeast Asia’s most mysterious archaeological cultures.”

Tags
ancient worldAnthropologyarchaeologyasiareligiontravel
In this article
ancient worldAnthropologyarchaeologyasiareligiontravel
Related
High Culture
Why are flood myths so common in stories from ancient cultures around the world?
Could the prevalence of flood myths around the world tell us something about early human migration or even the way our brains work?
The Future
Space travel will radically change human psychology and spirituality
We are traveling in a realm that once exclusively belonged to the gods. Space travel will force humanity to rethink everything.
Strange Maps
Dutch government releases a genuine treasure map from WWII, sparking a hunt for the loot
X marks the spot. The Dutch town of Ommeren has been swamped by detectorists armed with shovels looking for $20-million treasure.
The Past
How the death of alchemy gave birth to modern science
Far from practicing witchcraft, the experimentation of medieval alchemists helped bring about the Scientific Revolution.
Thinking
Finding your essential self: the ancient philosophy of Zhuangzi explained
Adopting a healthy scepticism towards inherited ideas means “emptying the container of the Self.”
Up Next
Starts With A Bang
Is Herd Immunity Possible With A Large Vaccine-Hesitant Population?
Here are the best answers science has to a myriad of commonly asked questions.Over the past 12 months, the status of humans on planet Earth has changed dramatically. The COVID-19 […]