A group of archaeologists have discovered a remarkable trove of bone tools used roughly 48,000 years ago in a Sri Lankan cave, according to new research published in the journal Science Advances.

The study was led by Michelle Langley, an archaeologist at Australia’s Griffith University, along with other researchers from Griffith, Max Planck Institute for the Science of Human History (MPI-SHH), and the Sri Lankan Government’s Department of Archaeology.

The scientists examined tools and artifacts used between 48,000 and 4,000 years ago that were discovered in the Fa-Hien Lena cave site located in Sri Lanka’s southwest tropical forests, an area that has become one of the most important archaeological sites in South Asia since the 1980s. The assemblage of artifacts included 130 of the earliest known bone-arrow tips found out of Africa along with 29 utensils likely used to make clothing or bags. Also excavated were decorative beads chiseled from the tips of marine snail shells and the world’s oldest known beads made of red ochre — an ancient pigment used for a variety of things from body paint to sunscreen.

Archaeologists believe that these tools correspond to four phases of ancient human habitation of the site. Using radiocarbon technology to date thirty items from the site, researchers were able to create a timeline detailing how the tools evolved to become more sophisticated over time.

“Most of these tools were made out of monkey bone, and many of them appear to have been carefully shaped into arrowheads,” Langley told Tim Vernimmen of National Geographic. “They are too small and light to have been spearheads, which need some weight to gain force, and too heavy and blunt to have been blow darts.”

On close inspection, the size, forms and fractures found on many of the bone points led the researchers to believe that they were used as arrow tips for bow-and-arrow hunting to catch swift and nimble rainforest prey like monkeys and other tree-dwelling creatures. The arrow points increased in length over time for the purpose of hunting larger mammals like deer. If the researcher’s conclusions are correct, this finding marks the earliest definitive proof of high-powered projectile hunting in a tropical rainforest environment.

Additionally, the team uncovered a range of other bone and tooth tools used for scraping and piercing. They were likely used for making nets and working animal skins or plant fibers in the tropical environment.

“Evidence for the construction of nets is extremely scarce in artifacts many thousands of years old, making this aspect of the Fa-Hien Lena assemblage a startling find,” Langley said in a Griffith University press release. Because this wasn’t a cold region, the authors opine that the clothing made with the assemblage of tools may have been used for protection from insect-borne diseases.

Other tools discovered at the site were identified as implements probably associated with freshwater fishing. 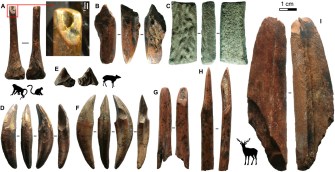 Before the great migration out of Africa, smaller groups of humans began to leave the continent between 200,000 and 100,000 years ago eventually migrating into South Asia. These findings offer clues as to how our ancient ancestors adapted to diverse, precarious environments during their global expansion, such as the tropical rainforest. Though the early humans of South Asia likely didn’t make their abode in the densely vegetated forest right away, opting instead for the coast, their decedents eventually would. And that move required some nifty new survival technology.

The researchers pointed out that their discoveries of these ancient tools underline the necessity of looking for early Homo sapien innovation in regions outside of the grasslands and coasts of Africa, or Europe where much of the research has been focused.

“[T]his traditional focus has meant that other parts of Africa, Asia, Australasia and the Americas have often been sidelined in discussions of the origins of material culture, such as novel projectile hunting methods or cultural innovations associated with our species,” said Patrick Roberts from MPI-SHH.

The shell beads that the team found indicate that the ancient forest dwellers traded with the populations that stayed along the coast. The beads were rounded and pierced, suggesting that they were strung. Earlier dated beads (around 8,700 years old) were made from red ochre nodules. The ancient jewelry is gauged to be similar in age to other “social signaling” materials found in Eurasia and Southeast Asia, according to the authors, which was around 45,000 years ago. This highlights the importance of establishing social connections for these early people through trade and symbol.

“Together, these artifacts reveal a rich human culture in the tropics of South Asia which was creating and utilizing complex hunting and social technologies to not only survive, but thrive, in demanding rainforest environments,” concluded study co-author Patrick Roberts, Ph.D., a researcher at the University of Queensland.

When we try to recreate simpler versions of natural ecosystems, we invariably make mistakes, argues author and biologist Rob Dunn.
Up Next
Hard Science

Study: Reflecting sunlight to cool the planet will cause other global changes