97% of climate scientists agree that the radical changes in the Earth’s climate, over the past century, are caused by human industry. So what about the remaining three percent? One of them recently approached a Congressional committee with a proposal. He wants to create “red teams,” which Congress would fund, to investigate what natural phenomenon could be warming the planet, rivaling the claim that human activity is the main driver. The goal would be to produce evidence to counter the Intergovernmental Panel on Climate Change (IPCC), among other prominent institutions. The IPCC is considered one of the world’s most respected authorities on global warming.

The idea was proposed at a hearing of the House Committee on Science, Space, and Technology. It’s currently majority Republican. The hearing was entitled, “Climate Science: Assumptions, Policy Implications, and the Scientific Method.” Several such hearings have taken place recently in House science-related committees, questioning whether climate change exists and if so, how impactful it actually is. This particular hearing focused on the scientific method and how it’s applied to climate change.

During the opening statement, Committee Chairman Rep. Lamar Smith (R-Texas), said that more needed to be known about the methodology employed by climate scientists. He said he believed the climate was warming and that human activity plays a role. But how large a role seemed to be in question, according to Smith. He went on to say that some climate science has been proposed by researchers who “operate outside of the principles of the scientific method.” As a consequence, their “alarmist findings are therefore reported as facts.”

He also claimed that many climate experiments lack reproducibility. In addition, he alleges that scientists at the National Oceanic and Atmospheric Administration (NOAA), and at East Anglia University, had, in instances past, altered facts to fit the commonly accepted narrative. Rep. Smith claimed that NOAA scientists omitted information that weakened the case for catastrophic climate change, and that the researchers at East Anglia, who had their emails hacked back in 2009, had done the same. 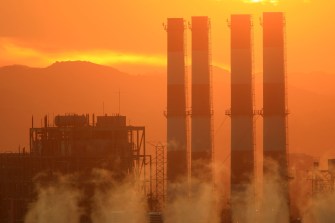 Most Republican lawmakers now say human activity is contributing to climate change. How much remains in debate. Getty Images.

Some witnesses called before the committee questioned the findings of the IPCC. They called the panel’s view “biased,” and not representative to the wider scientific community. John Christy is an atmospheric scientist at the University of Alabama, Huntsville. During his witness testimony, he said the IPCC starts with a political assumption, then selects those scientists who agree with them. The “red team” idea was his. Christy told the Washington Post that he had proposed it before, at other committee meetings.

Christy’s proposal is timely, as President Trump has vowed to pull the US out of the Paris climate accords, and appointed Scott Pruitt as his EPA chief, who has sued the agency on multiple occasions in the past. Climate change activists argue that Pruitt’s mission is to dismantle the agency, though he has made statements vowing to protect the climate in a common sense way, while also allowing for job creation and economic growth.

The Trump administration has also expressed interest in slashing funding for climate research. This seems at odds with lots of other branches of government, including the Pentagon, which has called global warming a significant and growing threat, and is making preparations against its effects.

Christy proposed the creation of “credible red teams” that could “look at issues such as natural variability, the failure of climate models and the huge benefits to society from affordable energy, carbon-based and otherwise.” He also said, “I would expect such a team would offer to Congress some very different conclusions regarding the human impacts on climate.” 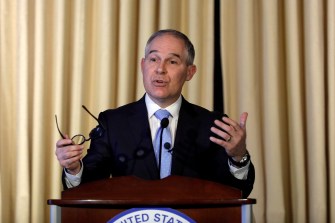 At least one scientist hailed the move, Dr. Judith Curry, Professor Emeritus at the Georgia Institute of Technology. After all she said, part of science is to play “devil’s advocate,” and try to evaluate one’s own biases, and how they might taint the work. What would it hurt to bring together a group of scientists with varying opinions? This approach could even help improve the climate science we have.

The use of red teams in simulations, to try to discover the weaknesses in one’s defenses, is a method employed by the Department of Defense and the CIA, in both the virtual and real world. One example is employing hackers to test a new cybersecurity system.

Other scientists question whether the point of a “red team” in this arena is to merely obfuscate the issue. Peter Frumhoff, director of science and policy for the Union of Concerned Scientists, considers it a smoke screen. He called the move, “a completely ridiculous proposition.” The National Academy of Sciences already offers Congress an unvarnished view on climate change, he said, and their findings have been unwavering.

Frumhoff told the Washington Post that climate science has been conducted using airtight methods. He said, “The notion that we would need to create an entirely different new approach, in particular for the specific question around global warming is unfounded and ridiculous and simply intended to promote the notion of a lack of consensus about the core findings, which in fact is a false notion.” 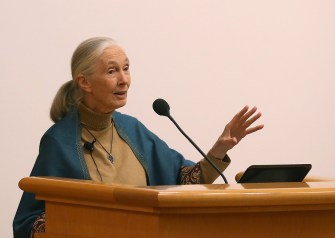 While the vast majority of climate scientists believe that fossil fuels are the main driver of global warming, Curry and Christy still question how much it actually contributes. Climate scientist Michael Mann of Pennsylvania State University, called the idea of IPCC bias, “hogwash.” He said politicians were cherry-picking scientists already aligned with their views. Since scientific research in several branches is being slashed from proposed federal budgets, such “red teams,” may never come into being.

Ask world renowned primatologist Dr. Jane Goodall whether such red teams would be a smokescreen or good scientific practice, and she would probably say the argument is moot. She talked to reporters the day before the hearing, after giving a speech at American University in Washington.

Dr. Goodall called the Trump administration’s climate agenda “immensely depressing,” but said that the public has “woken up,” to the catastrophic damage being done to their environment. People are extremely motivated to save the planet, she said, not just for themselves, but for future generations.

A new study mapped areas of the U.S. that are most likely to suffer natural disasters.
Up Next
Surprising Science

What Does SpaceX’s Reusable Rocket Mean for Space Travel?

SpaceX, the private company with big dreams for manned spaceflight, has launched a partly used rocket into orbit at a lower cost than building a brand new one.