But what if this didn’t have to be the case? Could genetic information be stored in media other than the two nucleic acids of DNA and RNA? New research published in the Journal of Chemical Information and Modeling suggests that there might not be just a handful of alternative molecules for storing genetic information, but millions. 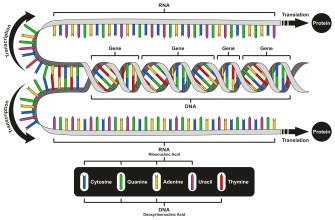 The central dogma of biology asserts that the genetic information is transcribed from DNA to RNA, which then translates that information into useful products like proteins. This new research, however, suggests that DNA and RNA are just two options out of millions of others.

Analogues to nucleic acids exist, many of which serve as the foundation for important drugs for treating viruses like HIV and hepatitis as well as for treating cancers, but until recently, no one was sure of how many unknown nucleic acid analogues could be out there.

“There are two kinds of nucleic acids in biology,” said co-author Jim Cleaves, “and maybe 20 or 30 effective nucleic acid-binding nucleic acid analogues. We wanted to know if there is one more to be found or even a million more. The answer is, there seem to be many more than was expected.”

Cleaves and colleagues decided to conduct a chemical space analysis — in essence, a sophisticated computer technique that generates all possible molecules that adhere to a set of defined criteria. In this case, the criteria were to find compounds that could serve as nucleic acid analogues and as a means of storing genetic information.

“We were surprised by the outcome of this computation,” said co-author Markus Meringer. “It would be very difficult to estimate a priori that there are more than a million nucleic acid–like scaffolds. Now we know, and we can start looking into testing some of these in the lab.”

Though no specific analogues were targeted in this paper, it does present a long list of candidates to be explored for use as drugs for serious diseases like HIV or cancer. A more intriguing possibility suggested by the research is that life itself may have taken its very first steps using one of these alternative compounds.

Many scientists believe that before DNA became the dominant means of storing genetic information, life used RNA to code genetic data and pass it down to offspring. In part, this is because RNA can directly produce proteins, which DNA can’t do on its own, and because it’s a simpler structure than DNA. Over time, life likely started to opt for using DNA for storage due to its greater stability and to rely on RNA as a kind of middleman for producing proteins. But RNA on its own is still a very complicated compound and is fairly unstable; in all likelihood, something simpler came before RNA, possibly using some of the nucleic acid analogues identified in this study.

A galaxy of nucleic acid analogues

Not only does this shed light on how life may have started on Earth, but it also has implications for alien life as well. Co-author Jay Goodwin said, “It is truly exciting to consider the potential for alternate genetic systems based on these analogous nucleosides — that these might possibly have emerged and evolved in different environments, perhaps even on other planets or moons within our solar system. These alternate genetic systems might expand our conception of biology’s ‘central dogma’ into new evolutionary directions, in response and robust to increasingly challenging environments here on Earth.”

When we search for extraterrestrial life, often we’re looking for signs of RNA and DNA, but this may be an excessively narrow scope. After all, if millions of alternatives exist, there would need to be something very special indeed for life to universally favor using just DNA and RNA.

The oldest person in history lived to 122