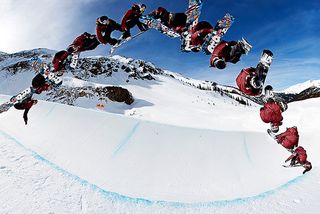 One of the best articles that I’ve read about innovation this week actually had absolutely nothing at all to do with business innovation — at least on the surface. Hannah Karp of the Wall Street Journal recently took a closer look at When Snowboarders Baffle the Judges. Faced with the prospect of judges that are not always on top of radical new snowboarding techniques, innovative snowboarders like Shaun White have a choice — either keep their innovative snowboarding tricks under wraps until major competitions, or step-by-step unveil these innovations to the judges before the actual event.

For example, snowboard champ Shaun White has been working on snowboarding routines in Silverton, Colorado ahead of the Vancouver Olympics in 2010. Instead of keeping these snowboard routines hidden from judges until the Olympics, he’s actually been showcasing them to judges (and, by extension, to competitors). The reason? If judges see the snowboard tricks in action without knowing more about their technical difficulty, they are more likely to mark them lower:

“The emphasis on innovation this season has snowboarders grappling

at first sight. Many top riders, including Mr. White, are haunted by

the prospect of becoming the next Jonny Moseley, the free-spirited

Roll.” Though he executed it perfectly and the move has since elicited

higher marks for difficulty, he received lower scores for his jumps at

the time than his competitors got for their tried-and-true twists.

“Tricks can be deceiving,” Mr. Moseley says. “I worked twice as hard

to be able to perform that in the Olympics than anyone else.” Mr. White says he could have saved his surprise moves for Vancouver to

increase the “wow” factor and prevent copycats from stealing his

thunder, but he decided it was more important “to educate the judges.”

So what does this mean for business innovators? Well, if you’re going to be innovative and out-of-the-box creative in the workplace, you may need to give your bosses an early preview of your innovation. Otherwise, your managers may not be able to, umm, understand what you’re thinking and what you’re attempting to do. They mistake your creative free-thinking for a failure to take the business task at hand seriously. Little do they know that you are breaking the existing paradigm and coming up with a new Jonny Moseley “Dinner Roll.”

What do you think? Has there ever been a time when your “innovation” was met with a slackjawed non-response because your bosses had no idea what you were doing?

Fluphenazine, once used to treat schizophrenia, is capable of blocking a compound connected to chronic pain.
Up Next
Guest Thinkers

Looking back at pivotal events that took place within the business world in 2009, it is becoming increasingly clear that there are five macro trends that will be shaping a […]