Physicists at Stanford, who have spearheaded the billion-dollar Gravity Probe B mission, have announced that they have found Einstein’s missing inch, once again proving the correctness of general relativity. 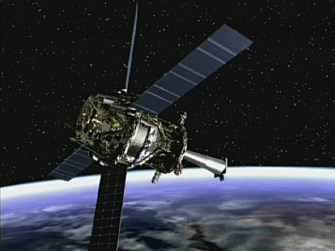 According to Einstein, the sun warps the space-time surrounding it, so the earth moves in a curved line, a circle, as it orbits around this distortion. Usually, in flat space, the circumference of a circle is (pi times the diameter). But if space is curved, then the perimeter should shrink a bit, deviating from Greek geometry. This distortion of space-time was first measured in 1919, when star light was shown to bend around the sun during an eclipse. But no one has ever measured this effect for the earth.

The experiment is quite daunting, since the effect is extremely small, no more than an inch over a distance of 24,000 miles or so. That is why the Gravity Probe B satellite took decades to build, at a cost of almost a billion dollars. Many times, the project ran out of money and had to go to private donors to keep it alive. Not to mention that it’s rough history has gone on and on since it was originally conceived in 1959.

The Gravity Probe B not only confirmed the earth’s warping of space-time, also verified the existence of frame dragging. Since space-time can be viewed as a fabric, then a spinning body should drag some of this fabric along with it as it rotates. Again, this is a tiny effect, but it, too, was measured by Gravity Probe B.

Remember, any theory, including Einstein’s, must pass every single experimental test. Even if there is one data point which does not fit, it might be enough to overthrow that theory. But so far, Einstein’s two theories of relativity have passed ever test.

According to a recent article on Space.com, “These results conclude one of the longest-running projects in NASA history. Decades of research and testing led to groundbreaking technologies to control environmental disturbances that could affect the spacecraft such as aerodynamic drag, magnetic fields and thermal variations. The GP-B project has led to advancements in GPS technologies that help guide airplanes to landings. Additional innovations were applied to NASA’s Cosmic Background Explorer mission, which accurately determined the universe’s background radiation left over from shortly after the Big Bang.”

In fact, you test Einstein’s theory with your smart phone, which uses GPS to locate your position to great accuracy. Most people don’t even think about or even care how the GPS works on the phone but if Einstein’s theory were wrong, the GPS system would not work, and you would probably get lost. So next time you open the GPS or Navigation App on your smart phone… remember that Einstein was the person that helped make it possible for you to easily navigate half way around the city without getting lost.

Einstein certainly has had the last laugh this week but also confirms just how far ahead of his time he actually was. Perhaps in another decade or so, we will finally be able to prove one of his other theories that have yet to be confirmed. Until then…

Surely they can’t be worse…can they?
Up Next
Guest Thinkers

Three years of the Chaitén eruption: Understanding the perception of volcanic hazards

Last week I marked my third blogiversary – and acknowledged that I started this blog looking for information on an eruption that had started in Chile. That eruption turned out […]