Last week I marked my third blogiversary – and acknowledged that I started this blog looking for information on an eruption that had started in Chile. That eruption turned out to be Chaitén, a rhyolite volcano that hadn’t erupted in over 9,000 years. We were all stunned by the images of the giant eruption plume (see below) that sent ash across all of southern South America. The domes that have grown in the Chaitén caldera continue to grow – now at a much slower rate than in the year after the eruption began – but it is now over 3 years of emissions from the domes with the caldera.

The eruptive plume from Chaitén seen on May 4, 2008

One of the biggest issues that followed the eruption of the volcano Chaitén was what to do about the town Chaitén, located ~10 km from the caldera. The town was inundated with ash, lahars and the distal end of pyroclastic flows (see top left and below), making the town all but uninhabitable, especially when considering the potential future hazards for a town so close to Chaiten. Some residents have been hesitant to move to “New Chaitén” near Santa Barbara and whether they truly appreciate the hazard considered with living in Chaitén is unclear, but it is clearly difficult to tell people where they have spent most of their lives. The Chilean government has now changed its stance and will restore power to the 400 people who have returned to “Old Chaitén” and promise to reinvigorate Chaitén as a gateway to Patagonia. Call it stubbornness, call it resilience, but it shows how even a clear-and-present volcanic danger can be willfully ignored by people due to their bonds to a community. 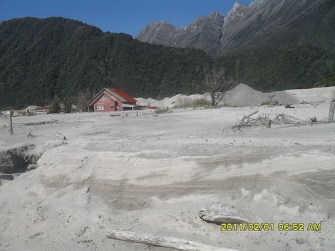 Parts of the town of Chaiten, buried under ash and lahar deposits in February 2011. See original here.

Activity still continues at Chaitén, with active steaming and small ash plumes a regular event in the caldera. The SERNAGEOMIN/OVDAS has the volcano still on Yellow Alert status for the periodic taller plumes that the volcano can produce. Low levels of seismicity continue under the volcano as well. You can watch Chaitén on one of the two SERNAGEOMIN webcams and possibly catch one of the ash plumes from the domes. How long this eruption will go on is still unclear, so the question how safe the people in a revived Chaitén (the town) are will be a concern of the Chilean government for potentially years to come.

Top left: The inundation of the town of Chaitén after the 2008 eruption of the volcano of the same name.

Without a solid understanding of the factors that affect the transfer of learning, the gulf between training and job performance is difficult to bridge.
Up Next
Surprising Science

Experiences Can Change the Brain

Studies in neuroscience over the last few decades have confirmed an idea originally suggested by philosophers and psychologists: how much the brain can change in response to our experiences.