In the wake of the Aug. 23 court decision that halted Federal funding for embryonic stem cell research, Democrats are gearing up to use stem cell research as a wedge issue in the upcoming mid-term elections.  I have been studying and publishing research on the dynamics of the stem cell debate since 2001, and one conclusion remains clear: For a political party that prides itself on being “pro-science,” a wedge strategy approach to stem cell research threatens to further divide Americans’ views on the issue while undermining an effort at engaging in an urgently needed substantive discussion about the ethics, uncertainties, benefits, and costs of research.

When President Obama issued an executive order in early 2009 expanding funding for embryonic stem cell research, the action was widely celebrated as evidence of a Democratic administration delivering on a president’s inaugural promise to “restore science to its rightful place in America.”  Yet the Executive Order, while politically convenient, left the door open to legal strategies to block funding.  As Peter Boyer described last week in a cover story at The New Yorker, the White House and Democratic leaders in Congress could have prioritized legislation that would have protected stem cell funding, eliminating the threat of a legal gambit, and ending more than a decade of distracting political warfare over the issue, but other issues were considered more pressing.

Research advocates say that the court decision has had an “immediate and devastating impact,” but out of this devastation Democratic leaders see a political opportunity.   As Congresswoman Diana DeGette tells Politico, if Democrats can bring legislation to vote before the November election, they can use the vote as a key campaign strategy: “The stars are pretty well aligned.  This is a positive wedge issue. Supporters [Democratic members of Congress] can use it in an election because there is strong public support and its opponents look extreme.”

DeGette is correct that the stem cell issue can have a mobilizing impact on voters, but not without several negative consequences for public perceptions and understanding of the issue.  A 2006 study I published with my colleague Kirby Goidel at Louisiana State University found that during the height of the national debate over embryonic stem cell research in 2003, the segment of the public most likely to participate politically on the issue were those among the Christian conservative base who were mobilized directly by churches through sermons, political materials, and direct requests to get involved.

Trends in political mobilization, however, began to change leading up to the 2004 election.  In contested Congressional districts and in Presidential battleground states such as Wisconsin and Missouri, the Democratic Party began to use stem cell research as part of an electoral “wedge strategy,” with the hope of winning votes among moderate Republicans and Independents who might be lured by claims of breakthrough cures and local economic growth.  They continued with this wedge strategy in the 2006 mid-term elections.  As a recently published study finds, in the 2006 Wisconsin gubernatorial race, claims about the linkages between stem cell research and economic growth were significantly linked to voters’ intention to become politically involved on the issue.

Yet this hope for cures and economic growth was often taken too far by many advocates, most notably John Edwards, who in 2004 infamously declared that if John Kerry were elected, Christopher Reeve would be able to walk again.  The Wedge strategy also had a notable influence on public opinion.  With the public actively seeking short cuts to make sense of complex issues such as stem cell research, when Democratic leaders told them that stem cell research was in fact a deeply partisan issue, their views followed along.  As the survey trends from the VCU Life Science Survey shows below, a major gap between Democrats and Republicans began to appear right around 2004 when Dems turned to stem cell research in their campaigning.  [Similar trends are shown by Gallup.] 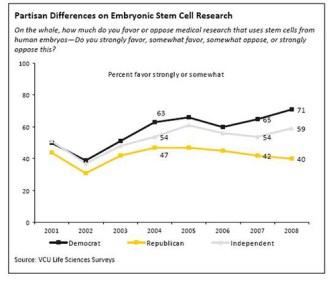 In 2007, as I wrote at the time, the political energy surrounding embryonic stem cell research evaporated with the announcement of the discovery that adult stem cells could be reprogrammed to appear to have the same therapeutic potential as those stem cells derived from embryos.  Despite scientific uncertainties, it was far less politically tenable for conservative Democrats to claim an urgent need for embryonic stem cell research now that an apparently ethically acceptable “middle way” existed.   At the state level, in a time of tight budgets and a poor economy, convincing voters to back big state financing of embryonic stem cell research has been an even harder sell.   And for the Obama campaign in 2008, given John McCain’s support for stem cell funding, the issue was no longer salient or politically advantageous.

And so two months out from the 2010 November election, with few of their agenda items attractive to swing voters in contested districts, the August court decision has enabled Democrats to turn once again to extraordinary campaign claims about the urgent need to support life saving, breakthrough cures.

None of this of course is good for either public understanding or ultimately trust on the issue.  From both Democrats and Republicans there have been the absence of political leadership, each party only turning to the issue when politically convenient and neither side ever working to elevate a national discussion about the ethics, benefits, uncertainties, and economic trade-offs involved in pursuing research.  Obama, despite claims to elevating the status of science in American society, devoted a single speech to the topic, issued an executive order, and turned to other issues, leading to this latest round of political drama and conflict.

Until this cycle of political opportunism ends, the country will be locked in a shallow, ethically inconsistent political shout fest over scientific research, rather than ever approaching a much needed substantive dialogue [or reaching a policy on human cloning research, for that matter].  Leaders such as President Obama have the potential to engage the American public in unprecedented ways on the serious ethical and moral questions surrounding biomedical research.  The decision to do so requires living up to the principles behind the political rhetoric.

The Next Stage in the Stem Cell Debate Begins

Your Brain on Drugs: Dopamine and Addiction

What is happening to the neurochemistry of an addict’s brain that makes that person so unable to do without cocaine, heroin, or methamphetamines?