Activity along the newly-formed rift that opened between Napau and Pu`u O`o craters this weekend continues to be active. It isn’t in constant eruption, but it does cycle through periods of heightened activity and according to the Hawaii Volcano Observatory, some of the fire fountains have sent lava shooting skyward as much as 30 m / ~100 feet. Coming along with the lava is extremely elevated sulfur dioxide emissions, from the recent baseline of ~700 tonnes/day to now over 10,000 tonnes/day. This suggests that the magma is readily degassing under the new rift – and all this fire fountaining supports the idea that this injection of magma might be very gas-rich. Apparently it is still unclear whether the rift eruption is a brand new injection of magma or diverted lava from the weekend’s collapses/draindowns. Also, all of the downrift activity from Pu`u O`o, such as the Thanksgiving Eve Breakout, seems to have shut down since the opening of the new fissure system. Deflation at the summit and Pu`u O`o also seems to have flattened out since the initial eruption over the weekend. It looks pretty quiet this morning (March 8) on the new Pu`u O`o to Napau webcam, but as the Kilauea status update mentions, the activity at the new rift comes and goes. We haven’t lost all the lava at the Halema`uma`u summit crater as even now, a glow is visible from the lava lake that now sits 200 meters below the crater floor. HVO has plenty of images and movies of the new eruption, so be sure to check those out, while Big Island News has a nice video timeline of the events during this new eruption. 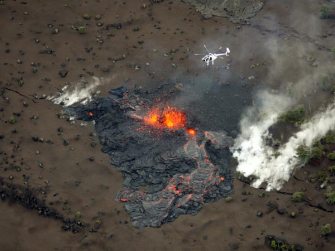 A part of the new rift eruption on Kliauea. This clearly shows a fissure eruption that has coalesced into a spatter rampart with a pahoehoe lava flow on the bottom center of the image. See the original image here.

This eruption has followed the typical pattern for Hawaiian volcanism (at least stages 3-5). You can get an idea of the scale of the Kilauea in this image of the volcano from HVO – the Halema`uma`u summit crater is on the horizon with Pu`u O`o in the foreground. The Napau Crater is seen next to the plume and the new fissure would inbetween these two features (Pu`u O`o and Napau). All of this activity is the first big change in Kilauea’s activity in quite a few years – remember, the volcano has been in constant eruption for almost 30 years. This has, of course, already boosted tourism to the islands and believe me, it is hard to shake the idea to hop on a jet to see the new eruption in action – of course, it is still a good idea not to get too close to the action, especially when the fissure system is still developing.

Image of the East Rift Zone of Kilauea in July 2007. Image courtesy of HVO/USGS.

Top left: An aerial view of part of the new fissure eruption on the East Rift Zone of Kilauea, as seen on March 6, 2011.

There are different types of atheism and atheists. In general, they can be classified as the non-religious, the non-believers, and agnostics.
Up Next
Guest Thinkers

The Power of Communities in Modern Language Learning

In the near future, foreign language students will interact online with other students around the globe, creating communities for exchanging language skills.