I’ve gotten a number of questions about volcano books as of late, so I thought I’d write a little post detailing my favorite volcano-related tomes, mostly pitched towards people without a geology-background, but some technical books for those of you who want the gory details (and be sure, they can be very, very gory). 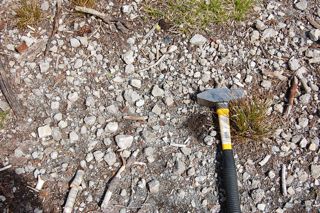 Pumice from the Newberry Flow of the Devil’s Hills scattered on the soil near South Sister, Oregon. Image by Erik Klemetti, September 2008.

– Fire Mountains of the West by Stephen L. Harris (Mountain Press, 2005 – Third Edition) – One of the best marriages of the science and lore of volcanoes, albeit only on the Cascade Range volcanoes (plus Long Valley).

– Vulcan’s Fury by Alwyn Scarth (Yale University Press, 1999) – I’ve used this book as the text for my “Volcanoes and Human Culture” class, mostly because it gets the science correct, has a lot of historical records/text and is a fun read. It covers a series of important volcanic eruptions since the dawn of volcanology up to Pinatubo in 1991.

– Melting The Earth by Haraldur Sigurdsson (Oxford University Press, 1999) – The author’s name should be familiar to many of you, and Dr. Sigurdsson put together quite a yarn on the development of volcanology as an intellectual pursuit through the ages.

– Volcanoes : Second Edition by Peter Francis and Clive Oppenheimer (Oxford University Press, 2004) – The first edition of this text was the book I used when I took Volcanology and this new edition updated by Clive Oppenheimer keeps the very-readable tone set by the late Peter Francis. In my opinion, the best and easiest to read introductory volcanology textbook.

– Volcanic Successions : Modern & Ancient by Ray Cas and John Wright (Chapman & Hall, 1988) – If you want to get into the nitty-gritty of physical volcanology, this is the book for you. We’re talking entire chapters on subaqueous pyroclastic flows and deep-sea ash layers. A classic.

– Encyclopedia of Volcanoes edited by Haraldur Sigurdsson (Academic Press, 2000) – Now we’re talking “gory details”. This volume is a mere 1418 pages of the fine details of the science from understanding viscosity of magma to volcanoes in literature and film. It really is the “be all and end all” of volcanology, but not for the faint of heart.

– Igneous Petrogenesis by Marjorie Wilson (Unwin Hyman, 1989) – For those of you who want to know more about the processes that drive volcanoes, both tectonically and magmatically, this text book is a great resource. It deals with the processes of magmatism and how we understand in the framework of global tectonics. It is a little old now (and dying for a new edition), but still invaluable.

– Volcanoes of North America – United States and Canada editied by Charles Wood and Jurgen Kienle (Univ. of Cambridge Press, 1990) – Another book in need of a new edition (and I seem to remember there is one in the works), but for those of you in North America, you can find almost every active/dormant volcanic edifice in the continent.

Hope this helps some of you who want to delve more into the science. Feel free to suggest any of your favorites here as well.

Related
Starts With A Bang
Ask Ethan: What are white holes, and do they really exist?
In General Relativity, white holes are just as mathematically plausible as black holes. Black holes are real; what about white holes?
Life
Strange life forms create an “alien” ecosystem in an abandoned uranium mine
Slimy biofilms made up of bacterial and eukaryotic life forms have taken over an abandoned, flooded uranium mine in Germany.
Hard Science
Earth has an eerie “sodium glow,” and astronomers use it to image stars
Air currents in our atmosphere limit the resolving power of giant telescopes, but computers and artificial stars can sharpen the blur.
Health
How saliva changes the flavor of food
“It’s a liquid, but it’s not just a liquid.”
High Culture
Why are flood myths so common in stories from ancient cultures around the world?
Could the prevalence of flood myths around the world tell us something about early human migration or even the way our brains work?
Up Next
Guest Thinkers
Monday Musings
I chime in on some of the discussions about caldera-forming eruptions and inflation of volcanoes in the Andes. Also, news on the stimulus money to volcano monitoring and “our island blew up.”