Some people love books filled with tiny lists and tables more than others. I tend to be in the “love” category, likely because of all the baseball statistic books I have lying around the house. So, when a book that is the volcano equivalent of, let’s say,Baseball Prospectus comes out, then I know I have to be excited.

A little history: before we have the interweb and the Global Volcanism Program website, we had books. You know, the things with paper pages. If you wanted to know a little something about every volcano on the planet, you’d read for Volcanoes of the World, the first of which came out in 1981. Since that first edition 30 years ago, the database of eruptions and volcanoes that the GVP has recorded has doubled – a second edition came out in 1994 to deal with this new influx of data. This means, that in the 15 years since the 2nd edition, there pile of volcanic information keeps on growing – and even with the Global Volcanism Program website that houses much of this information, Volcanoes of the World in an invaluable resource for any true volcano aficionado. You might ask why – well, the book works all the time, is much easier to “leaf through” for interesting tidbits and honestly, it is impressive to have lying around. Every volcanic everyone that we know about all wrapped between its covers – an impressive testament to geology to say the least.

That being said, Volcanoes of the World (3rd Edition), by Lee Siebert, Tom Simkin and Paul Kimberly, might not be for everyone. Like I said, a large portion of the book is more-or-less statistics (see below), with information about location, known eruptions, data methods, style of eruption, VEI (and much of this data is complexly coded so they can fit it all in one 551-page book). Each section of the book is divided by geographic region, with accompanying maps and descriptions of both the volcanic and human history of a region – all to help find the volcanoes in question (see below).

A sampling of the data presented in Volcanoes of the World, 3rd Edition 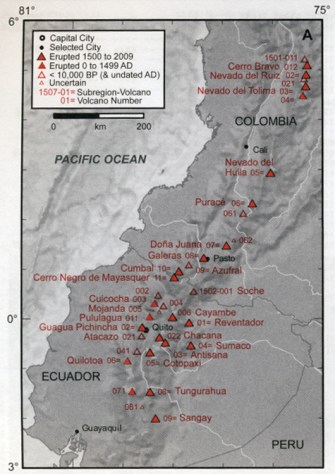 A map of Colombia and Ecuador from Volcanoes of the World, 3rd Edition 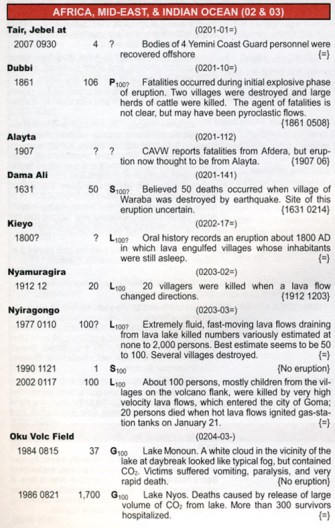 Now, one part of the Volcanoes of the World I like the most is the introduction, where the authors tackle the phenomenon of volcanism and the hazards posed by them in an information and statistical fashion – and with some excellent figures. Some examples:

So, where are all the volcanoes relative to population? 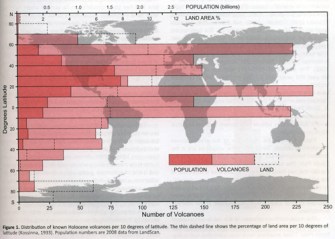 So, what are the different types of volcanic eruptions? (Note the addition of “Icelandic”) 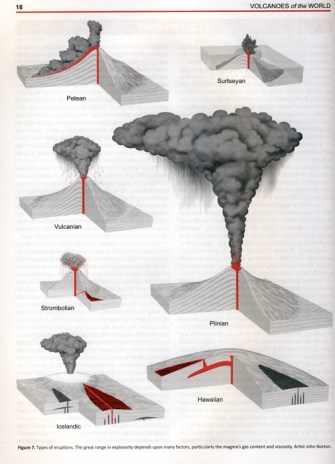 Are volcanic eruptions increasing in frequency? Answer: No, but our ability to find/report eruptions are, thus the apparent “increase” in number of known eruptions. I get this question a lot and I can understand why this perception might exist, but as the authors explicitly state “Even in the last two centuries, we find historical trends in reporting overshadowing any real trend in volcanism”. 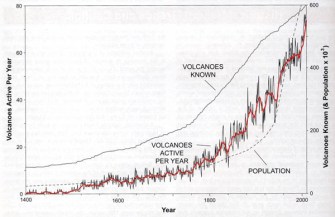 Are all volcanic eruptions treated the same in the media? Answer, as most of us know, is a resounding “No”. 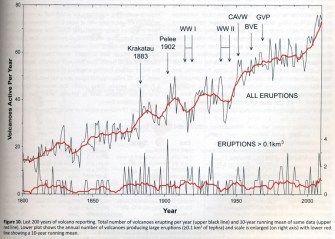 What regions have the most people located near the largest number of volcanoes? Answer: it depends on how you look at it – population within a 10-km or 100-km radius of the volcano – and including all Holocene versus merely eruptions since 1500 A.D. 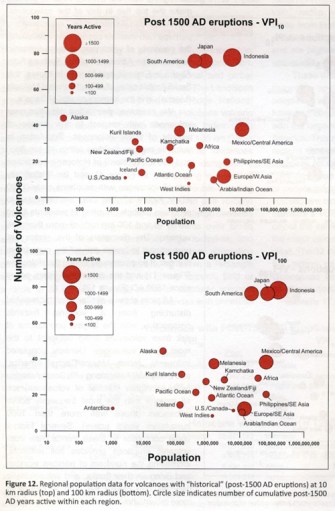 This ~45 page introduction is densely packed with only the sort of analyses one could do when you have a database of the entire planet’s volcanism over the last 10,000 (and up to 2 million) years. Even beyond the text itself, the book has thousands of references to find more information about your favorite volcano and images – both black & white and color – of eruptions worldwide from over the last century. This book straddles that region of technical and popular – it might be a little too dense for your typical coffee table, but easily has information that even the most unseasoned volcano fan could find fascinating. It is a perfect companion for the GVP website, but easily stands on its own as well.

Disclaimer: I received a copy of this book as a member of the volcanology media from the publisher. However, the comments are meant as a guide to you, the readers, not as an advertisement for the book.

Top left: Part of the cover for Volcanoes of the World, Third Edition.

Here are two cutting-edge solutions for how we can leverage social media in times of crisis.