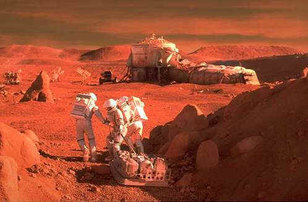 As part of its “Works & Process” series of events, the Guggenheim

Museum in New York is presenting a lecture by legendary physicist, mathematician and futurist Freeman Dyson of Princeton’s Institute

for Advanced Study in early March. The lecture is titled “How We Might Have Gone to

Mars in 1965″ and will be illustrated with slides of people,

“In this lecture he speaks about Project Orion.

Project Orion was a dream that didn’t come true.  It was a scheme to

propelled by a large number of nuclear bombs.  The project began in

1958 as a technically superior alternative to chemical rockets. The

intention was to land on Mars by 1965 and on Enceladus, one of the

moons of Saturn, by 1970, collecting ice at the destination to use as

propellant for the voyage home.  The project demonstrated the

feasibility of the concept with physics calculations, detailed

engineering designs, and experimental measurements of the damage to

explosives were flown at Point Loma in San Diego. However the nuclear

Anyway, the idea of using nuclear-powered rockets to visit Mars sounds fascinating. If you’re interested, the lectures take place on March 4 and 5 at the Guggenheim Museum on the Upper East Side of Manhattan. If you can’t make it, might I suggest renting Mission to Mars or Red Planet?  (I know, I know, they both received lackluster ratings on IMDb, but if you’re a space exploration junkie, it’s usually possible to overlook bad acting, bad scripts and bad directing, eh?)