It has now been one year since the eruption that closed the skies over Europe and captured the world’s attention. Before April 13-14, 2010, most people outside Iceland (or this blog) had ever heard the name Eyjafjallajökull and suddenly (much to the dismay of broadcasters everywhere), it became a household name.

We’ve talked about the volcano – a lot – and rightly so. The eruption at Eyjafjallajökull won the 2010 Pliny for Volcanic Event of the Year, narrowly beating out the eruption at Merapi in Indonesia. Although the eruption at Merapi might have been a bigger disaster in terms of human life and property, it didn’t come close to the 24 hour media coverage that was seen during the height of the Eyjafjallajökull event. Part of that was because Eyjafjallajökull was smack in the middle of the western world, between Europe and North America, instead of in southern Asia, where most of the people affected by Merapi were not Americans or Europeans (that’s the media for you). Part of it was that there was controversy surrounding Eyjafjallajökull – namely the closure of airspace over Europe. The debate broke down, as many things do, between corporations and government, with the airlines wanting a quick closure (for obvious reasons) and the EU government wanting to be more cautious. Both sides were arguing mostly the same points: (1) we don’t know what different amounts of ash will do to aircraft and (2) we don’t know exactly where the ash is over the continent. Now, many people came out against the EU government because of their overly cautious approach and reliance on models to predict the location of the ash plume (thanks to diligent work by the London VAAC), but really, there was no other plan on how to deal with such an eruption affecting Europe. In the hearings in the United Kingdom about the closure, it was clear that no one has truly anticipated that an eruption of this relatively small magnitude in Iceland could have such a profound impact on almost the entire European community. 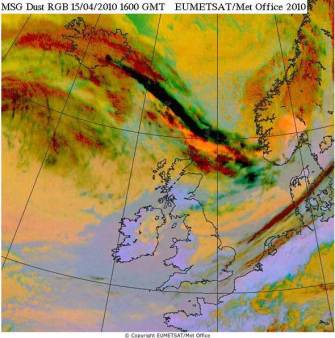 Satellite image showing the ash from Eyjafjallajökull spreading over Europe on April 15, 2010.

So, rather than rehash all the finer points of the eruption – which you can see in the announcement for the 2010 Pliny, your thoughts on the eruption or the vast Eyjafjallajökull archive on Eruptions – I thought I’d take my personal stab at what we learned and didn’t learn from the eruption that stopped Europe. 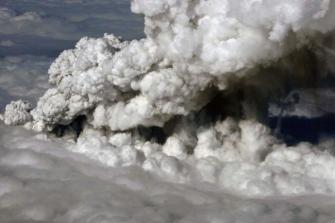 The steam and ash plume from Eyjafjallajökull seen on April 14, 2010.

What we didn’t learn:

Needless to say, the eruption of Eyjafjallajökull is going to become the textbook example of how a volcano will effect the modern, technologic society of the western world in the early 21st century. It brought some of the great superpowers to their knees with a few explosions and left many people wondering why governments around the world don’t have a plan for volcanic disasters, even if you’re a country like the UK with no local volcanoes of your own. However, I hope it did get people, especially in government and air travel, to think about how to better deal with an eruption that has the ability to disrupt so much air traffic (ahem, Rainier … or for a better comparison, Glacier Peak?) so the next time an eruption threatens, we have a plan on how to handle the ensuing chaos.

A conservator from the Rijksmuseum explains how to confirm whether a painting is a genuine Rembrandt.
Up Next
Surprising Science

Researchers say they are ahead of schedule in a bid to discover (or disprove) the mysterious “God particle”–the stuff that makes stuff stuff. How else do objects get their mass?