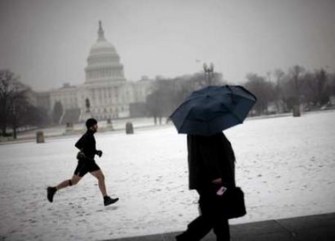 Irony can be an effective persuasion tool. As pictured on the Drudge Report this morning with the headline: HEARING ON ‘WARMING OF PLANET’ CANCELED BECAUSE OF ICE STORM. The headline links to a Drudge posted press release, likely sent his way by staffers in the James Inhofe “Big Oil” wing of the GOP.

The Subcommittee on Energy and Air Quality hearing scheduled for Wednesday, February 14, 2007, at 10:00 a.m. in room 2123 Rayburn House Office Building has been postponed due to inclement weather. The hearing is entitled “Climate Change: Are Greenhouse Gas Emissions from Human Activities Contributing to a Warming of the Planet?”

The hearing will be rescheduled to a date and time to be announced later.

Wednesday: Freezing rain in the morning. Total ice accumulation between one half to three quarters of an inch. Brisk with highs in the mid 30s. North winds 10 to 15 mph…increasing to northwest 20 to 25 mph in the afternoon. Chance of precipitation near 100 percent.