Somehow, there is still a public debate on whether climate change is occurring and how much of it humanity is responsable for. This is despite the agreement of 97% of climate scientists on the matter and decades of research. It gets even stranger when you realize that the idea that humans can change the environment is older than gasoline-powered cars and that people were discussing the potential effects of climate change before the Titanic sank.

How You Get People to Take Climate Change Personally

The article goes on to somewhat contradict its own caption, explaining how it is “highly improbable” that there would be enough change in the atmosphere within the next thousand years to have any noticeable effect on global temperatures, though it does argue that the Earth will get warmer before it gets cooler.

The Popular Mechanics article was hardly ahead of its time. An article in Nature published in 1882 concluded that increased pollution “will have a marked influence on the climate of the world.” This article was widely discussed, and follow-ups to it are credited with popularizing discussion about the effects of pollution on the environment.

A basic understanding of the greenhouse effect goes back to 1824 when Joseph Fourier argued that Earth’s atmosphere allowed the planet to be warmer than it would be without one. He even speculated on the potential for humans to alter the climate, though he thought altering the land was more important to the process than changing the composition of the atmosphere. You can see in this quote how he also thought the process would take much longer to notice than it has:

The establishment and progress of human societies, the action of natural forces, can notably change, and in vast regions, the state of the surface, the distribution of water and the great movements of the air. Such effects are able to make to vary, in the course of many centuries, the average degree of heat; because the analytic expressions contain coefficients relating to the state of the surface and which greatly influence the temperature.

His ideas were followed up on by Svante Arrhenius in 1896. Working as a chemist, he was able to determine how much the temperature of the planet would increase for each unit of carbon dioxide introduced into the atmosphere. Working forwards from of his calculations, he was the first to understand that global warming by means of changing the composition of the atmosphere is possible. He phrased his ideas in what is now known as “Arrhenius’ rule.”

He also didn’t think we had much to worry about anytime soon from this phenomenon. He even once told an audience: 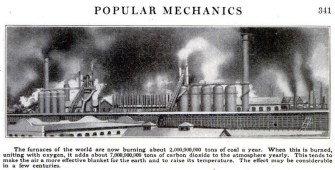 Clipping from the 1912 article ‘Remarkable Weather of 1911: The Effect of the Combustion of Coal on the Climate — What Scientists Predict for the Future’ in Popular Mechanics.

We’ve put a lot more carbon into the air than these scientists probably thought we would—that alone would throw off their estimates even if they had the better understanding of climate change that we have today.

As for thinking climate change could be good, they weren’t alone. The idea that human intervention in the climate was good for us was widespread during the 19th century. Farmers were told that the act of plowing encouraged rainfall in the drier regions of Australia and the United States. In the light of this optimism, the idea that we could warm up the planet probably gave these early climatologists visions of more summer sun and better crop yields rather than nightmares of worsening natural disasters.

It is largely the courageous, enterprising, and ingenious American whose brains are changing the world. Yet even the dull foreigner, who burrows in the earth by the faint gleam of his miner’s lamp, not only supports his family and helps to feed the consuming furnaces of modern industry, but by his toil in the dirt and darkness adds to the carbon dioxide in the earth’s atmosphere so that men in generations to come shall enjoy milder breezes and live under sunnier skies. 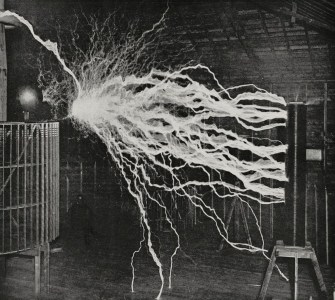 “Within a few years a simple and inexpensive device, readily carried about, will enable one to receive on land or sea the principal news, to hear a speech, a lecture, a song or play of a musical instrument, conveyed from any other region of the globe. The invention will also meet the crying need for cheap transmission to great distances, more especially over the oceans. The small working capacity of the cables and the excessive cost of messages are now fatal impediments in the dissemination of intelligence which can only be removed by transmission without wires.”

He seemed to think we’d have smartphones much sooner than we did, however. This is understandable since he was trying to invent transatlantic wireless communication at the time, he was just extremely optimistic. On the other hand some predictions look utterly absurd in retrospect. Great thinkers like Alfred Nobel and Guglielmo Marconi predicted that globalization, advanced weaponry, and international communication would make a general European war impossible—they thought so right up until July 1914.

Chicken Little or Cassandra? How to Save the World from Future Disasters …

Tags
climate changecoalecologyenvironmentnatural disasterpollutionweather
In this article
climate changecoalecologyenvironmentnatural disasterpollutionweather
Related
Life
Strange life forms create an “alien” ecosystem in an abandoned uranium mine
Slimy biofilms made up of bacterial and eukaryotic life forms have taken over an abandoned, flooded uranium mine in Germany.
The Present
Climate change is altering the chemistry of wine
Smoke taint from wildfires is gross, even to wine amateurs.
Life
Our antidepressant drugs are affecting animals and ecosystems
A toxicologist explains the impacts of antidepressants on fish — and no, they’re not getting any happier.
Hard Science
200 years of exploring Antarctica
What we’ve learning from the world’s coldest, most forbidding, and most peaceful continent.
Life
Most of the seafloor is a thick graveyard of ooze
Each year, several trillion pounds of microscopic silicon-based skeletons fall down the water column to pile up into siliceous ooze.
Up Next
The Present
Denis Mukwege and Nadia Murad win Nobel Peace Prize for combating wartime sexual violence
The 2018 Nobel Peace Prize has been awarded to two people, one a doctor and one a survivor of ISIS captivity, for their work in raising international awareness about wartime sexual violence.