The 2018 Nobel Peace Prize has been awarded to Dr. Denis Mukwege, a Congolese gynecologist, and Nadia Murad, a Yazidi woman and former captive of ISIS, for helping to combat wartime sexual assault.

“Both laureates have made a crucial contribution to focusing attention on, and combating, such war crimes,” said Berit Reiss-Andersen, chair of the Nobel Committee, on Friday at the Norwegian Nobel Institute in Oslo.

Who is Dr. Mukwege?

Dr. Mukwege is the founder of the Panzi Hospital in the Democratic Republic of the Congo, a nation the U.N. has called the “rape capital of the world” and where more than 1,000 women are raped every day. The initial goal behind the hospital was to curb maternal mortality rates.

“But our first patient did not come to deliver a baby,” Dr. Mukwege said in a 2016 speech. “She had been raped with extreme violence.”

Since 1999, the Panzi Hospital has treated more than 50,000 survivors of sexual violence through a five-pillar holistic healing model that includes “physical care, psychosocial support, community reintegration services, legal assistance, and education and advocacy to address the root causes of violence.”

“You just can’t imagine how a smile, a simple handshake, to just tell them ‘be encouraged’ is important to them. To feel they are loved, to feel they can finally find love and affection,” Dr. Mukwege told CNN in 2009.

Dr. Mukwege once described how seeing the recovery of young sexual violence survivors motivates him to keep working

The Nobel committee said that Dr. Mukwege’s philosophy is “justice is everyone’s business.”

“Denis Mukwege is the foremost, most unifying symbol, both nationally and internationally, of the struggle to end sexual violence in war and armed conflicts,” said Reiss-Andersen. 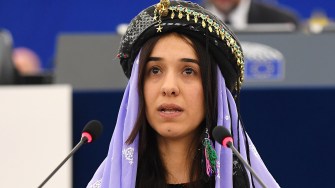 Nadia Murad accepts the 2016 Sakharov Prize for Freedom of Thought, which she shares with Lamiya Aji Bashar, for their work in advocacy for the Yazidi community in Iraq and survivors of sexual enslavement by the Islamic State jihadists.

Who is Nadia Murad?

In August 2014, ISIS militants invaded Murad’s Yazidi community in the village of Kocho in Northern Iraq, a region that’s long been home to the monotheistic religious minority. The militants told all the residents to walk to a school on the outskirts of town, and, upon arriving, separated the men from the women.

Murad, who was 19 years old at the time, watched as the militants murdered more than 300 men, including six of her brothers and step brothers. The militants took her, along with other young women, as a sex slave. The elderly women, presumably too undesirable or burdensome to the militants, were executed and buried in a mass grave that would later be discovered by Kurdish forces.

In an interview with Time, Murad describes how some of the captured women committed or attempted suicide.

“I did not want to kill myself, she said. “But I wanted them to kill me.”

For three months, Murad was held as a slave in Mosul by ISIS militants who beat her, burned her with cigarettes, and raped her after a failed escape attempt. One night in November 2014 her captor left a door unlocked and she managed to escape, eventually ending up in Germany through a program that helps relocate refugees.

Since her escape, Murad has been speaking out about the atrocities she and her fellow Yazidis suffered at the hands of ISIS, who consider the Yazidi to be “kafir” or nonbelievers. In 2015, she told part of her story to the U.N. Security Council.

“I cannot imagine how painful it must be every time you are asked to recount your experience,” U.S. Ambassador to the U.N. Samantha Power said to Murad after her testimony. “And your being here and speaking so bravely to all of us is a testament to your resilience and your dignity—and it’s of course the most powerful rejection of what ISIL stands for.”

It’s estimated that, around the time of Murad’s capture, ISIS militants killed more than 5,000 Yazidi men, captured about 6,500 women and children, and forced the evacuation of hundreds of thousands more.

“For eight months, they separated us from our mothers and our sisters and our brothers, and some of them were killed and others disappeared,” Murad told CNN in 2017.

Murad is the 17th woman to win, and the second-youngest recipient of, the Nobel Peace Prize.

Reiss-Andersen said both winners have put their own personal security at risk by combating war crimes and seeking justice for victims.

“Denis Mukwege is the helper who has devoted his life to defending these victims,” Reiss-Andersen said. “Nadia Murad is the witness who tells of the abuses perpetrated against herself and others.”

As of Friday morning, it wasn’t clear whether Murad was aware she had won the award; the committee couldn’t reach her by phone. Dr. Mukwege was reportedly in the middle of surgery when he found out he had won.

“For almost 20 years I have witnessed war crimes committed against women, girls and even baby girls not only in my country, the Democratic Republic of Congo, but also in many other countries,” he said.

“To the survivors from all over the world, I would like to tell you that through this prize, the world is listening to you and refusing to remain indifferent. The world refuses to sit idly in the face of your suffering.”

Tags
culturedenis mukwegeisisnadia muradnobel committeenobel peace prizesex crimessexual violence
In this article
culturedenis mukwegeisisnadia muradnobel committeenobel peace prizesex crimessexual violence
Related
Neuropsych
The trouble with medicating mental illness
Has the “age of psychopharmacology” shrunk society’s sense of responsibility for mental health?
The Present
Americans are among the most loving, Chinese and Germans the least
A new study of global love finds that Americans have some of the most loving relationships, while Chinese and Germans have some of the least.
Neuropsych
Duolingo is probably a better Alzheimer’s treatment than the newest breakthrough drug
And it’s much, much less expensive.
High Culture
5 great (and underrated) songs about cities
Most popular songs are about love and heartache. But some great songs — albeit underrated and perhaps a bit weird — are about the cities we love.
The Past
Here’s what being filthy rich in Europe looked like in 1000 BC, 1 AD, and 1000 AD
Studying the display of personal wealth across time can help us better understand the history of socioeconomic inequality.
Up Next
Hard Science
Astronomers discover dwarf planet beyond Pluto. It’s nicknamed ‘The Goblin.’
Is The Goblin’s orbit a breadcrumb leading us to Planet X?