Eritrea and Ethiopia, two of the world’s poorest nations, fought a war against each other from 1998 to 2000. A peace treaty in 2000 stopped the large-scale fighting, but a stalemate ensued, and both sides have in recent years accused the other of sparking smaller border clashes.

I am humbled by the decision of the Norwegian Nobel Committee. My deepest gratitude to all committed and working for peace. This award is for Ethiopia and the African continent. We shall prosper in peace!

But after taking office in 2018, Abiy pursued peace talks with Eritrea.

“In close cooperation with Isaias Afwerki, the President of Eritrea, Abiy Ahmed quickly worked out the principles of a peace agreement to end the long “no peace, no war” stalemate between the two countries,” the academy wrote.

“He spent his first 100 days as Prime Minister lifting the country’s state of emergency, granting amnesty to thousands of political prisoners, discontinuing media censorship, legalising outlawed opposition groups, dismissing military and civilian leaders who were suspected of corruption, and significantly increasing the influence of women in Ethiopian political and community life. He has also pledged to strengthen democracy by holding free and fair elections.”

Still, ethnic conflicts within Ethiopia have displaced more than 3 million people in recent years, and critics of Abiy – who’s already survived one assassination attempt – argue that his policies will make matters worse.

“No doubt some people will think this year’s prize is being awarded too early,” the academy wrote. “The Norwegian Nobel Committee believes it is now that Abiy Ahmed’s efforts deserve recognition and need encouragement.”

The Swedish Academy awarded two writers the Nobel Prize in Literature: The Polish author and poet Olga Tokarczuk received the 2018 award, and the 2019 prize went to Austrian author and playwright Peter Handke.

Last year’s Nobel Prize in Literature was postponed due to a sexual assault scandal involving the husband of an academy member. After the scandal, several board members departed and the academy changed the way it chooses winners.

Handke is a 76-year-old Austrian playwright, novelist, essayist, and poet who gained acclaim early in his career for his avant-garde play “Offending the Audience.” He’s also written many scripts for films, including Die linkshändige Frau (The Left–Handed Woman), which in 1978 was nominated for the Golden Palm Award at the Cannes Film Festival.

But Handke’s win is proving controversial. The writer is a well-known apologist for former Serbian leader Slobodan Milosevic, who was accused by a United Nations tribunal of war crimes related to wars in Kosovo, Croatia, and Bosnia. In his writings, Handke controversially portrayed Serbia as a victim of the Yugoslav Wars. Although Handke declined Milosevic’s request to appear as a witness at his U.N. trial., the writer did eulogize Milosevic after he died in prison awaiting trial.

“I think he was a rather tragic man,” Handke said in a 2006 interview. “Not a hero, but a tragic human being. I am a writer and not a judge.”

Surprisingly, in 2014 Handke said the Nobel Prize for literature “should be abolished” because it “promotes the false canonization of literature.”

A handful of writers and literary organizations have already denounced the academy’s decision to award the prize to Handke.

“We are dumbfounded by the selection of a writer who has used his public voice to undercut historical truth and offer public succor to perpetrators of genocide, like former Serbian President Slobodan Milosevic and Bosnian Serb leader Radovan Karadzic,” the novelist Jennifer Egan, who is president of PEN America, said in a statement on behalf of the organization. “At a moment of rising nationalism, autocratic leadership, and widespread disinformation around the world, the literary community deserves better than this. We deeply regret the Nobel Committee on Literature’s choice.”

“Have we become so numb to racism, so emotionally desensitized to violence, so comfortable with appeasement that we can overlook one’s subscription and service to the twisted agenda of a genocidal maniac?” tweeted Vlora Citaku, Kosovo’s ambassador to the United States.

Tokarczuk, who also won last year’s Man Booker International Prize for her novel “Flights,” is the 15th woman to win the Nobel Prize for literature. The judges described her as “a writer preoccupied by local life … but looking at earth from above … her work is full of wit and cunning,” and said she possesses “a narrative imagination that with encyclopedic passion represents the crossing of boundaries as a form of life.”

Tokarczuk is a controversial figure in Poland, a nation dominated by right-wing populist politics, which she frequently criticizes. After she criticized Poland’s history of colonialism in a 2014 interview, some right-wing nationalists called her a “targowiczanin,” an archaic term for traitor.

Some of Tokarczuk’s works to check out include: “The Journey of the Book-People,” “Primeval and Other Times,” and the screenplay for the crime film “Spoor”, which was nominated for best foreign language film at the 2018 Oscars.

How did the Big Bang produce the swirling galaxies that populate our universe, and how can scientists detect and study planets that orbit stars light-years away from Earth? The 2019 Nobel Prize in Physics goes to three scientists who helped shed light on these complex questions.

“While James Peebles’ theoretical discoveries contributed to our understanding of how the universe evolved after the Big Bang, Michel Mayor and Didier Queloz explored our cosmic neighborhoods on the hunt for unknown planets. Their discoveries have forever changed our conceptions of the world,” the secretary-general of the Royal Swedish Academy of Sciences, Goran Hansson, said.

BREAKING NEWS: The 2019 #NobelPrize in Physics has been awarded with one half to James Peebles “for theoretical discoveries in physical cosmology” and the other half jointly to Michel Mayor and Didier Queloz “for the discovery of an exoplanet orbiting a solar-type star.”pic.twitter.com/BwwMTwtRFv

Since the 1960s, Dr. Peebles’ work has helped to solidify and enrich cosmology, chiefly by finding ways to learn about the universe from the ancient radiation leftover from the Big Bang.

Some 400,000 years after the Big Bang, the universe cooled enough for light rays to travel through space. Today, billions of years later, this ancient radiation is still around us, though its temperature is near absolute zero. But Dr. Peebles discovered that the temperature of this background radiation provides clues about how much matter was created by the Big Bang.

The calculations made possible by this discovery also shed light on the matter and processes in the universe that we can’t see: dark energy and dark matter.

“The results showed us a universe in which just five per cent of its content is known, the matter which constitutes stars, planets, trees – and us,” the academy wrote. “The rest, 95 per cent, is unknown dark matter and dark energy. This is a mystery and a challenge to modern physics.”

2019 #NobelPrize laureate James Peebles took on the cosmos, with its billions of galaxies and galaxy clusters. His theoretical framework, developed over two decades, is the foundation of our modern understanding of the universe’s history, from the Big Bang to the present day.pic.twitter.com/fly4alndv9

Astronomers detect exoplanets by measuring extremely subtle changes in a star’s activity. These changes occur as exoplanets orbit their host star, and the predictability of the changes allows scientists to learn quite a lot about the properties of exoplanets. In 1995, Mayor and Queloz used this approach to discover the first planet outside of our solar system. It might sound surprising to us today, but before their discovery astronomers considered that maybe it was extremely rare for stars to have planets orbiting them, meaning life outside of Earth would be even more unlikely, if not impossible.

“This discovery started a revolution in astronomy and over 4,000 exoplanets have since been found in the Milky Way,” the academy wrote. “Strange new worlds are still being discovered, with an incredible wealth of sizes, forms and orbits. They challenge our preconceived ideas about planetary systems and are forcing scientists to revise their theories of the physical processes behind the origins of planets. With numerous projects planned to start searching for exoplanets, we may eventually find an answer to the eternal question of whether other life is out there.” 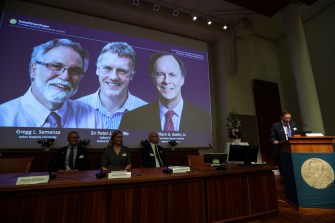 The 2019 Nobel Prize in medicine was awarded to three scientists from the U.S. and U.K. working independently on the same problem: how cells sense and adapt to oxygen availability. Gregg Semenza of Johns Hopkins University, Sir Peter Ratcliffe of Oxford University, and William Kaelin, Jr., of Dana-Farber Cancer Institute/Harvard University received the 5 a.m. call from Stockholm. The three maintained an ongoing and informal conversation, sharing work and consequentially rocketing the entire field of study forward.

Their research unveiled a genuine textbook discovery. “They’ve unveiled the series of molecular events that allow cells to assess and respond to changing levels of available oxygen, with implications in the treatment of cancer, heart attacks, strokes, anemia, and other diseases,” according to previous Big Think reporting. Read the full article dedicated to the findings here.

Yukio Mishima treated his life as if it were a story — one with a surprising and deadly final act.
Mind & Brain

Scientists use tripping rats to show that LSD disrupts communication between two key brain regions.
Up Next
Critical Thinking

Barbara Corcoran: Hiring or firing, these are the keys to create a killer sales team

When it comes to hiring great salespeople, the statistics do not paint a pretty picture. In the U.S., roughly a third of all salespeople leave or are fired from their […]