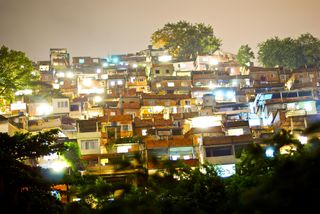 Without a doubt, Bruce Sterling is one of the leading visionary thinkers helping to shape the future of innovation. Ever since the 1970s, he’s been imagining the future and sharing his vision for what could be — and coining lots of new terms along the way that eventually enter the popular lexicon (like blobjectsand spimes). As Sterling recently explained in his closing address at the reboot 11 conference, one possible scenario for the future is the “favela chic” scenario, in which material wealth is non-existent, but individuals are plugged into the grid and satiated with Facebook and Twitter. Over at Influx Insights, Ed Cotton summarizes Sterling’s remarks at reboot 11:

“According to Sterling, the coming future does not look or act like any future we’ve previously thought about. This

Gibson called ‘a-temporality” (which he describes as steam-punk with

metaphysics). His view of the future is darkly labeled “transition to nowhere”; no more booms and bad weather…”

According to Sterling, the future comes in two flavors:

“Steve Jobs creates something brilliant, but you have to suffer from

(2) Favela Chic: “You have lost everything material, no job or prospects, but you are wired to the gills and really big on Facebook.”

So what does all this mean for the average tech-savvy, capitalistic uber-consumer? At the end of the day, Sterling suggests keeping things that are beautiful, things that have emotional value for you, and things that are just plain useful. Everything else you own — and that’s probably 80% of all your material possessions, you can simply get rid of. (For the full video of Sterling’s speech, check out this 43-minute reboot video)

Of these two scenarios, I think Favela Chic is more realistic. Relentless growth from nations like Brazil (home of some of the world’s grimmest favelas), India and China means that entire communities may lack paved roads and decent infrastructure, but still have amazing super-fast broadband access and the ability to communicate with the farmer located four time zones away.