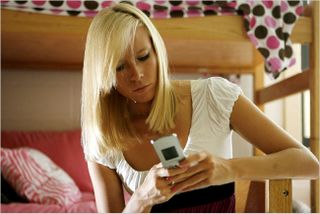 Within the tech world, the explosive growth of Twitter has (literally) been front page news over the past six months, with Twitter appearing on the cover of TIME Magazine and New York Magazine, among others. What’s interesting is that Twitter’s phenomenal growth hasn’t come from where you’d think it would come from — early adopters in the young teen demographic. In fact, as Claire Cain Miller of the New York Times points out, teenagers (like the New Jersey teen pictured above) would rather text their friends a message rather than post it on Twitter. Instead, Twitter has been embraced by an older demographic:

“Twitter’s unparalleled explosion in popularity has been driven by a
decidedly older group. That success has shattered a widely held belief
that young people lead the way to popularizing innovations. “The
traditional early-adopter model would say that teenagers or college
students are really important to adoption,” said Andrew Lipsman,
director of industry analysis at comScore. Teenagers, after all, drove
the early growth of the social networks Facebook, MySpace and Friendster. Twitter,
however, has proved that “a site can take off in a different
demographic than you expect and become very popular,” he said. “Twitter
is defying the traditional model.”

Which raises an interesting question: Where else have the traditional early adopters not been the ones to spark widespread adoption of a new innovation? The New York Times points out that the Kindle, iPhone and GPS devices, among others, haven’t experienced exponential adoption curves by young teens either. With a wave of Baby Boomers set to retire soon, it may just be the case that marketing to the 52-to-59 year-old demo may be more effective than marketing to the 12-19 year-old demo…