Is the recent tectonic activity around Japan a forewarning that Japan's largest volcano will blow? Probably not, explains volcanologist Erik Klemmeti. 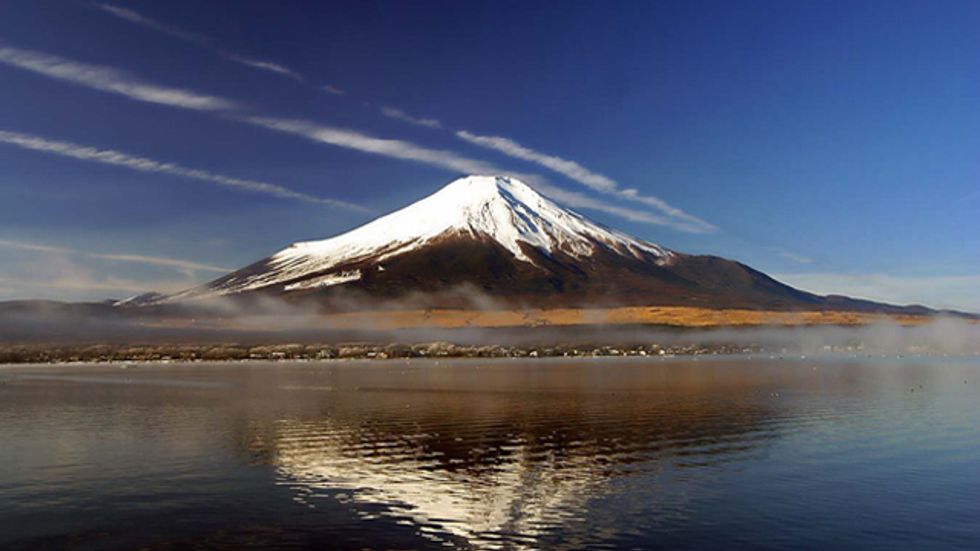 Mt. Fuji (a volcano with more names than almost any other) in Japan is one of the most historically important volcanoes, possibly only rivaled by Vesuvius in its place in the mind's of people. In Japan, it is sacred, one of the three holy mountains of Japan, and visited frequently - one of the most popular hiking destinations on the planet with over 200,000 visitors a year. It can appear tranquil, but has a history that is more violent than the near-perfect stratocone (see top left) shape betrays.

Mt. Fuji is a product of the subduction zone that straddles Japan, with the Pacific Plate (to the north) and the Philippine Plate (to the south) subducting underneath the Eurasian plate. This is what drives the volcanoes and seismicity that occur so frequently in Japan, including volcanoes like Sakurajima, Kirishima, Unzen and, of course, Mt. Fuji.

Painting by Katsushita Hokusai of Mt. Fuji in the sunset.

The edifice of Fuji is huge. Looking at topographic relief maps (with some vertical exaggeration) of Honshu, the volcano dominates the southern region of the island. Fuji itself is over 3,700 meters / 12,000 feet tall (the tallest mountain in Japan) with a base that is 50 km in diameter. As with many large volcanoes, Fuji is actually the youngest of a number of volcanic systems that have been centered at this location - Komitake, Ko-Fuji (older) and Fuji (younger) - with scores of other vents pockmarking the flanks of the edifice. The oldest deposits in the Fuji complex are over 100,000 years old, but the modern edifice people associate with Fuji likely began growing ~11,000 years ago. The summit is dominated by a 500 meter crater that is almost 250 meters deep.

Fuji has experienced 16 eruptions since 781 A.D. - one of the more active in Japan, but quiet since ~1708. Sometimes the eruptions can be large - VEI 5 in 1707, 1050, 930 BC. Typically the eruptions are basaltic to andesitic, although the youngest Fuji is mainly basaltic. The early history of Fuji appears to be effusive, with extensive lava flows accounting for a quarter of the volcano's volume but sometime between 8,000 and 4,500 years ago the activity became more explosive - with a mix of larger explosive events and intermittent, smaller effusive eruptions.

Map of the volcanic deposits of Mt. Fuji, Japan.

The 1707-1708 eruption is the one that has some people concerned about what Fuji might have in store. On October 26, 1707, Honshu was struck by a M8.4 earthquake and less than 2 months later, on December 16, 1707, Fuji began erupting. The initial eruption was explosive ash and puma, but within hours of starting the eruption became basaltic fountaining from a flank vent. Over the next few weeks, Fuji erupted ~0.68 km3 of material before the eruption ended at the start of 1708. The magma erupted during this eruption was decidedly mixed - from basalt to dacite - suggesting that it was fed by multiple magma sources. Ash from this eruption reached as far as Tokyo. If you look at the eruptive history of Fuji and the record of major earthquakes in Japan, you can see there isn't any real correlation between the two, so trying to connect the October 26, 1707 earthquake with the December 1707 eruption at Fuji is likely tenuous at best.

Since 1707, there hasn't been much activity at Fuji. Unconfirmed reports suggest a small eruption could have occurred in 1770 and 1854, but these dates should be treated skeptically. Since 2000-01, there have been a number of small earthquake swarms under Fuji, but many of the earthquakes are thought to be tectonic-related and (obviously) did not lead to an eruption. Some of these earthquake swarms were long-period events that are thought to be basaltic magma slowly recharging below Fuji, so the volcano is clearly not dormant. There has been the usual, speculative discussion of whether Fuji is "overdue" - a word you know I dislike. It clearly has been longer since the last eruption of Fuji in 1707 than in the centuries prior to the 1707 activity. However, again, trying to say that the volcano should behave predictably is not advised as there is speculation that the size of the 1707 eruption may have altered the geometry of the Fuji magmatic system. Most of the earthquakes under Fuji cluster to the northeast of the summit crater, so it is though that the magmatic system for Fuji lies there at depths between 10-20 km.

As you can imagine, with Fuji looming near Tokyo (within 100 km, depending on how you define both Tokyo and Fuji), there has been extensive work on volcanic hazards associated with the volcano (see below). The largest hazards come from ash and pumice from explosive eruptions, with some potential for basaltic pyroclastic flows and lahars. Lava flows are a threat as well, especially for areas close to the volcanic edifice (and dependent on the location of the vent). Another large VEI 5 explosive event at Fuji could deposit between 0.5-16 cm of ash on the Tokyo area, which would be a crippling blow to the city and any air traffic to/from the highly populated area of Honshu. However, even with Fuji being so quiet as it has been since 1708, the cities around Fuji are prepared for new eruptions. However, it is most likely, based on the eruptive history of Fuji, that any new eruption will be small.

Mt. Fuji is clearly both a beautiful and dangerous volcano. However, there is little beyond anecdotal evidence that large earthquakes in Japan will cause Fuji to erupt. Even after this week's M9.0 earthquake and an earthquake located in the area of Fuji, there is no reason to have immediate concern about the volcano erupting - think of this like the Japanese version of the "concern" that Katla would erupt after Eyjafjallajokull's activity in 2010 (mostly coming from misinformed media and the apocalypse-loving crowd). So far, Fuji has not shown any of the signs of renewed activity, such as harmonic tremors or tornillos, with earthquakes starting deep and becoming shallower with time or increasing volcanic gas emissions - it remains tranquil. This does not mean that we should not keep an eye on Fuji (it definitely has many, many webcams pointed towards it) and be prepared because it is still clearly an active volcano. Fuji should be seen as a symbol of strength for a nation recovering from disaster, rather than another harbinger of doom.