4 Things That Currently Break the Speed of Light Barrier 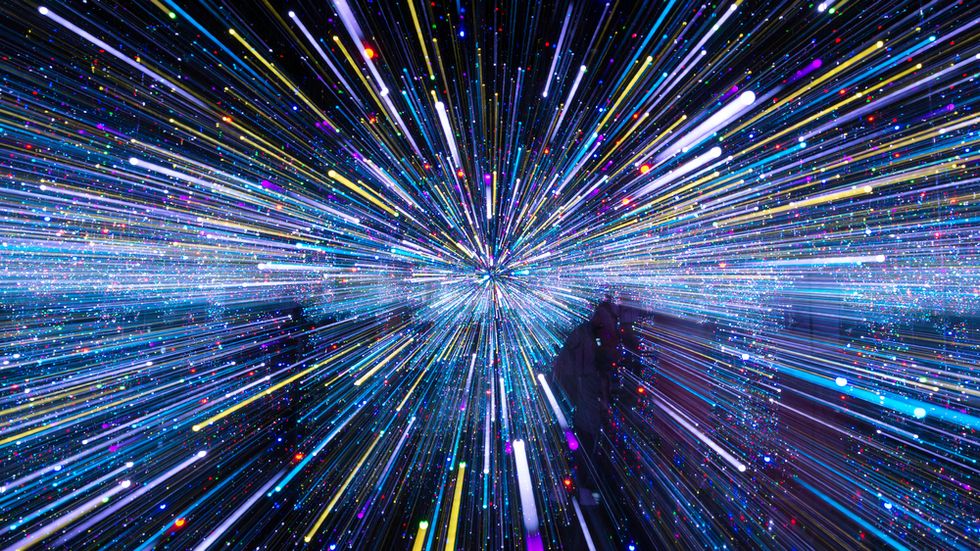 Most textbooks say that nothing can go faster than light, but that statement actually should be qualified: The answer is yes, you can break the light barrier, but not in the way we see in the movies. There are, in fact, several ways to travel faster than light:

2. If you wave a flashlight across the night sky, then, in principle, its image can travel faster than light speed (since the beam of light is going from one part of the Universe to another part on the opposite side, which is, in principle, many light years away). The problem here is that no material object is actually moving faster than light. (Imagine that you are surrounded by a giant sphere one light year across. The image from the light beam will eventually hit the sphere one year later. This image that hits the sphere then races across the entire sphere within a matter of seconds, although the sphere is one light year across.) Just the image of the beam as it races across the night sky is moving faster than light, but there is no message, no net information, no material object  that actually moves along this image.

3. Quantum entanglement moves faster than light. If I have two electrons close together, they can vibrate in unison, according to the quantum theory. If I then separate them, an invisible umbilical cord emerges which connects the two electrons, even though they may be separated by many light years. If I jiggle one electron, the other electron "senses" this vibration instantly, faster than the speed of light. Einstein thought that this therefore disproved the quantum theory, since nothing can go faster than light.

But actually this experiment (the EPR experiment) has been done many times, and each time Einstein was wrong. Information does go faster than light, but Einstein has the last laugh. This is because the information that breaks the light barrier is random, and hence useless. (For example, let's say a friend always wears one red sock and one green sock. You don't know which leg wears which sock. If you suddenly see that one foot has a red sock, then you know instantly, faster than the speed of light, that the other sock is green. But this information is useless. You cannot send Morse code or usable information via red and green socks.)

a) compressing the space in front of your and expanding the space behind you, so that you surf on a tidal wave of warped space. You can calculate that this tidal wave travels faster than light if driven by negative matter (an exotic form of matter which has never been seen.)

b) using a wormhole, which is a portal or shortcut through space-time, like the Looking Glass of Alice.

In summary, the only viable way of breaking the light barrier may be through General Relativity and the warping of space time. However, it is not known if negative matter exists, and whether the wormhole will be stable. To solve the question of stability, you need a fully quantum theory of gravity, and the only such theory which can unite gravity with the quantum theory is string theory (which is what I do for a living). Sadly, the theory is so complex that no has been able to fully solve it and give a definitive anwer to all these questions. Maybe someone reading this blog will be inspired to sovle string theory and answer the question whether we can truly break the light barrier.