Back From Extinction? Scientists Plan To Clone Woolly Mammoth

Researchers at Kyoto University claim they will be able to clone a baby mammoth from the DNA of a 10,000-year-old woolly mammoth. The time frame: 5 to 6 years. 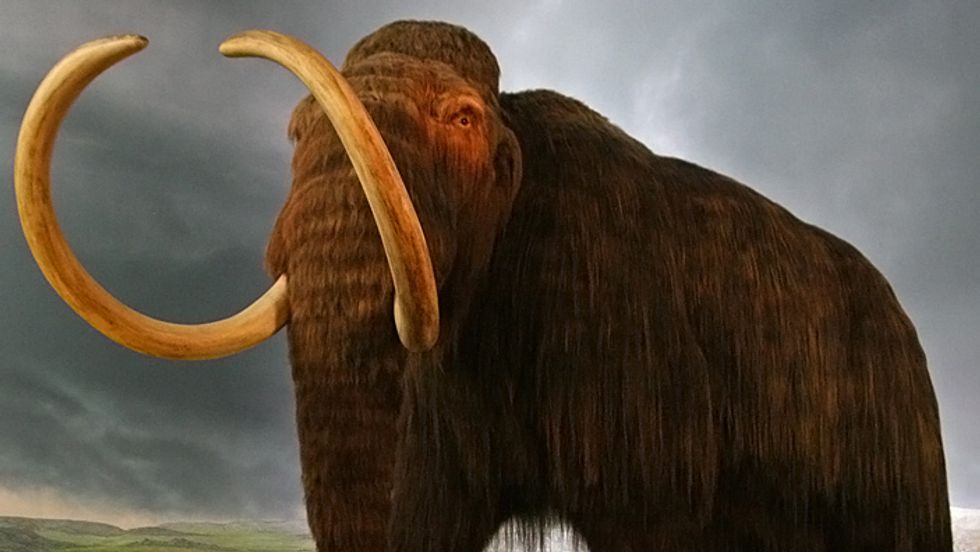 The woolly mammoth, also referred to as the tundra mammoth or woollies, has been extinct for thousands of years. Every once in a while, expedition crews around the world will unearth bones and frozen carcasses to later be examined and put on display in museums. Being that the hairy prehistoric animal thrived in much colder climates, they are at times completely preserved in their organic state, which is a major benefit of studying something that is so old. They had long woolly hair, three inches of thick fat under the skin and probably weighed in a general region of six to eight tons. Some woolly mammoth remains have been found with a great deal of the soft tissue still intact and undigested food in their stomachs. They are of course known for their long curved tusks of solid ivory which could reach over 15 feet in length. It is now thought that their tusks were used as primitive shovels in order to expose the vegetation that thrives underneath the snow that they couldn't reach otherwise.

Today, scientists analyze chemical signatures and growth markings in the tusks to better understand how they lived and possibly even clues into their extinction which has been debated for decades. Fossil collectors and enthusiasts can purchase mammoth ivory on the Internet with prices for full length intact tusks fetching 10's of thousands of dollars. With the trade ban on elephant ivory, Countries like Russia and China have found a loop hole by stepping around the ban and exporting mammoth ivory. Annually, Russia exports over 50 tons of mammoth ivory to China with some experts estimating that millions of mammoths are frozen in the Siberian tundra waiting to be found, excavated and sold.

Well, it turns out these prehistoric beasts are in the headlines once again with Japanese scientists claiming that they can bring them back into existence. Researchers at Kyoto University are working with a research lab in Russia that preserved a piece of woolly mammoth soft tissue that was discovered last summer which they state will help them produce a living-breathing baby mammoth within 5-6 years. The idea is to extract intact DNA from the Russian sample and then insert it into the living egg cells of a modern African elephant. If all goes well, a mammoth embryo would essentially be produced inside the egg of the elephant.

The Japanese team leader is Akira Iritani, a professor emeritus at Kyoto University. The concept of cloning the mammoth is nothing new and previous attempts have failed due to the age of frozen tissue not being able to yield usable biological material that is suitable enough for such a delicate process. If the Russian sample turns out to be ineffective, Professor Iritani and his team will keep searching. Finding a workable sample may be right around the corner considering that millions of mammoths are perhaps just beneath the surface. The frozen climate of Siberia has created an excellent environment for long term preservation of the organic and biological material the team requires. In 2007 for example, a University of Michigan paleontologist unearthed a 4-month old female mammoth in Siberia that was what he called "the best and most complete mammoth carcass--baby or adult--ever found."

Photo of the baby female mammoth can be found below or you can view a complete photo diary on the U of M website along with the original 2007 news release.

Professor Iritani, however, is utilizing a technique originally created by geneticists to clone a healthy living mouse from cells that were frozen for 16 years. In 2008, the researchers "drew dead blood and brain cells from the 16 year-old frozen mice and injected the nuclei directly into unfertilized mouse eggs, creating embryos." (Source: National Geographic) The report states that the scientists led by Professor Iritani hope to now use the same successful process with help from U.S. in vitro fertilization experts who will be responsible for implanting the mammoth embryo into the modern African elephant.

Image via WIRED & PNAS. Read the Full 2008 Report: Production of healthy cloned mice from bodies frozen at −20°C for 16 years at Proceedings of The National Academy of Sciences of the USA (PNAS)

There is a good chance this process will not work. After all, the biological material is thousands of years old and has undergone a great deal of degradation. But, perhaps the Siberian permafrost preserved everything the researchers need to complete their goal. The team is also questioning what the next step will be if the cloning actually works. The team states that they will examine the mammoth's ecology and genes to study why the species became extinct in the first place.

The 2008 cloning of a mouse using 16 year-old biological material was indeed the first achievement of its kind. There however was a previous record from a Chinese researcher who managed to clone frozen cells that were almost a year old. If the cloning of a long-extinct woolly mammoth from cells frozen in the permafrost for thousands of years can be achieved, it would truly be a magnificent feat.