A team of Japanese and Russian scientists has successfully “reawakened” cells from a 28,000-year-old woolly mammoth, according to a study published Monday in Scientific Reports.

The cells came from an extraordinarily well-preserved woolly mammoth discovered in Siberian permafrost in 2012 and nicknamed “Yuka”. Using a process called nuclear transfer, the scientists took nucleus-like structures from Yuka and implanted them into mouse oocytes, which are highly specialized cells that facilitate embryonic development. The scientists then used a live-cell imaging technique to observe how the structures reacted in their new environment. They saw traces of biological activity.

“I was looking under the microscope at night while I was alone in the laboratory,” 90-year-old Akira Iritani, a co-author on the new study who’s spent years working toward resurrecting the woolly mammoth, told CNN. “I was so moved when I saw the cells stir. I’d been hoping for this for 20 years.”

Still, this cell activity wasn’t significant enough to suggest it’ll soon be possible to clone woolly mammoths, which went extinct about 4,000 years ago. For example, the scientists couldn’t stimulate cell division in the mammoth cells, but did manage to induce activity that precedes it, such as getting the mammoth nuclei to perform a process called “spindle assembly,” in which chromosomes are attached to spindle structures before a parent cell divides into two daughter cells.

Another roadblock is the quality of the DNA samples. Even though Yuka’s was in relatively good condition, it was still significantly damaged. It seems vastly improved technology will be needed if scientists are ever going to clone a woolly mammoth, or create an elephant-mammoth hybrid — a more realistic possibility.

The study marks a “significant step toward bringing mammoths back from the dead,” researcher Kei Miyamoto, one of the study’s authors told Japan’s Nikkei news outlet.

“We want to move our study forward to the stage of cell division,” he said, adding “we still have a long way to go.”

But that doesn’t mean research like this is useless. For example, some scientists hope to learn more about the genetic adaptations of the woolly mammoth that enabled it to survive such cold conditions. The hope is that researchers might someday use gene-editing technologies like CRISPR to enable modern elephants to survive in the “mammoth steppe,” a massive swath of cold, dry land that stretched across northern parts of globe where mammoths used to roam. Introducing elephants to these areas could actually help curb climate. 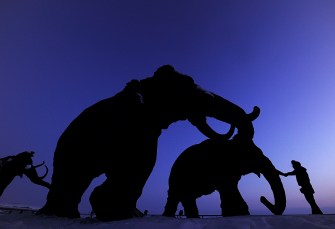 “The elephants that lived in the past — and elephants possibly in the future — knocked down trees and allowed the cold air to hit the ground and keep the cold in the winter, and they helped the grass grow and reflect the sunlight in the summer,” George Church, a Harvard and MIT geneticist, told Live Science at the 2018 Liberty Science Center Genius Gala. “Those two [factors] combined could result in a huge cooling of the soil and a rich ecosystem.”

But for some scientists, working to resurrect — or at least preserve — the woolly mammoth is more of a philosophical pursuit.

“It’s because of people that certain animals have gone extinct,” Iritani told CNN. “It’s my duty to preserve species.”

A biotech startup has received $15 million in funding to genetically recreate woolly mammoths and rewild them in Siberia.
The Future

A future kitchen appliance could make it possible to 3D-print entirely new recipes and cook them with lasers.
The Future

Why do we feel schadenfreude — and who it feels it the most?

Delving into the psychology of an uncommon joy.