MDMA — you know, ecstasy — use is once again on the rise. A recent UK/EU survey found that 2.1 million people aged 15-34 had used X in 2016. In the U.S., the National Institute on Drug Abuse says one out of ten people between 18 and 25 have taken ecstasy, and even middle schoolers are getting in on it, with 7% of kids 12 or older having consumed the illegal Schedule 1 drug.

It’s not all fun and festivals, though: There’s a dark side to the “hug drug.” A 2016 White House study reported that more than 22,000 people were hospitalized after taking ecstasy, and deaths from psychostimulants in general have skyrocketed from 563 people in 1999 to nearly 4,300 in 2014. Ecstasy, it turns out, does not always equal MDMA — it’s actually cut with nasty stuff that may be contributing to the problem.

MDMA — 3,4-methylenedioxymethamphetamine — is nothing new. It was patented over a hundred years ago, in 1913, reportedly as a diet drug that was never brought to market. The euphoric effect it produces was discovered by chemist Alexander Shulgin in the 1970s. He shared his discovery with psychologists friends, and it’s currently showing promise as a co-treatment for PTSD.

So what are recreational users of ecstasy/MDMA really taking? American Addiction Centers has been looking into this and have just released Adulterants in Drugs, an eye-opening study. Apparently one’s chances of actually obtaining pure-MDMA ecstasy are a lot lower than you’d think: only about 45%. 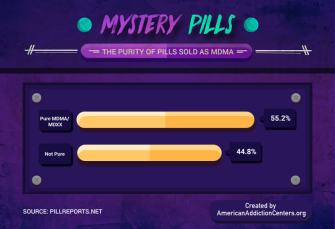 We’re not talking subtle amounts of adulterants, either. It’s not uncommon for an ecstasy dose to contain no MDMA at all. 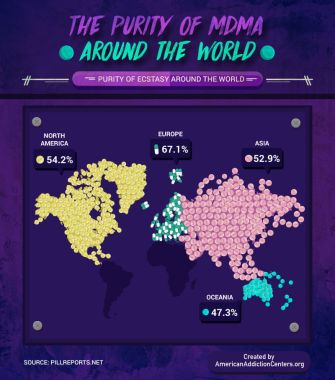 A study from PillsReport.net discovered that only about a third of the 25,725 ecstasy tabs they examined from six countries were pure MDMA, and in these pills, there was never more than 69% of it.

In some locations, there was more MDxx than MDMA being sold as ecstasy — this group of MDMA-like chemicals produces a similar effect, as does a substance called PMA. PMA, though, is slower to take effect than MDMA, and impatient users have been known to overdose trying to hurry it along.

Unfortunately, the prevalence of adulterants is getting worse. 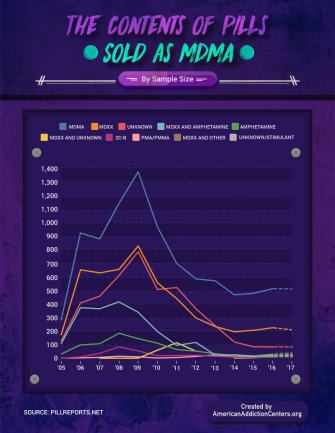 Meanwhile, researchers are looking into pure MDMA as a valuable supplement to psychotherapy in the treatment of PTSD. In November 2016, the U.S. F.D.A. approved large-scale Phase 3 clinical trials of MDMA as a follow-on to six promising Phase 2 studies funded by the Multidisciplinary Association for Psychedelic Studies, who will also fund the Page 3 trials.

Psychotherapy is currently the accepted treatment for PTSD, but often doesn’t work, as the process can be so excruciatingly painful for patients. MDMA, which produces a flood of neurotransmitters, including serotonin that produces a sense of well-being, and hormones like oxytocin and prolactin can apparently take the edge off the experience. Oxytocin, the “love hormone,” in particular, can increase the emotional connection between patient and therapist.

The New York Times spoke to C.J. Hardin, a veteran of three tours in Iraq and Afghanistan who’d tried psychotherapy, group therapy, and other medications before participating in an MDMA clinical trial. “It changed my life. It allowed me to see my trauma without fear or hesitation and finally process things and move forward.”

Too bad there’s so little of the stuff in ecstasy.

Is the Universe finite or infinite? Does it go on forever or loop back on itself? Here’s what would happen if you traveled forever.
Up Next
Starts With A Bang

Ask Ethan: Is it foolishness to dream of terraforming Mars?

Mars and Earth, to scale, shows how much larger and more friendly to life our planet is than our red neighbor. Image credit: NASA. The red planet is nearby, cool, sunny, […]