The Sign Post Forest is located in the town of Watson Lake in Canada’s Yukon territory. As you may imagine, it’s the town’s most popular tourist attraction. Since 1942, travelers from around the road have contributed over 77,000 signs from their hometowns. The first was a homesick U.S. Army private. From the Watson Lake website:

“While working on the Alcan Highway near Lower Post, BC, Private Carl K. Lindley from Company D, 341st Army of Engineers was injured and taken to the Army Aid Station in Watson Lake to recuperate. During that time Carl’s commanding officer got him to repair and repaint the directional post. While Carl was carrying out this task he decided to add his home town sign of DANVILLE, ILLINOIS. Carl was known as the homesick, lonesome soldier and he was aware of the tradition that he started and what is now known as the World Famous Signpost Forest.“ 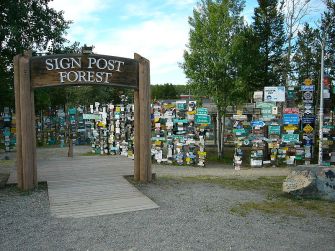 Ever wonder what digital disruption looks like up close? Take a peek at the tourism industry in major cities around the world. Instead of staying with established hotel brands like […]