Erik Seidel is a Poker Hall of Fame inductee and the winner of eight World Series of Poker bracelets. Author and New Yorker writer Maria Konnikova won her first-ever title and $84,600 at the PokerStars Caribbean Adventure 2018 tournament under Seidel’s tutelage. In this discussion, Big Think’s President and co-founder Peter Hopkins will ask the two about their highly successful mentorship. August 1 at NeueHouse Madison Square—doors open at 6:15 p.m. and the conversation starts at 6:30 p.m. RSVP here.

Pay attention and listen closely is a key message in the writing of Maria Konnikova, a journalist and author whose two best-selling books illuminate lessons about human psychology through irresistible subjects, like the world of con artists and the curious mental strategies of Sherlock Holmes. In her articles, which appear in publications like the New Yorker, Big Think, and The New Republic, Konnikova uses her background in psychology to explore the factors that go into decision-making by tackling questions like whether subtle manipulations of the flavor of food can trick us into healthy eating and why so few predicted the success of President Donald Trump in the 2016 election.

For her most recent book, the 33-year-old immersed herself in the world of Texas Hold’em poker and scored a rare opportunity to sit at the table with poker legend Erik Seidel for research. Her initial poker knowledge came almost exclusively from the movie Rounders, but in just one year she became so skilled at the game that she won a $84,600 tournament prize, prompting her to put her New Yorker writing gig on hold and pursue the game full time.

But Konnikova and Seidel are taking a break from poker on August 1 to join Big Think president and co-founder Peter Hopkins at NeueHouse Madison Square in New York City for a talk titled Stacking the Deck, a discussion about their unlikely yet wildly successful mentorship. The talk is free to attend—head here to RSVP. 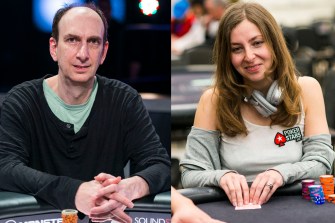 Konnikova is no stranger to Big Think. Before penning her best-sellers The Confidence Game and Mastermind, she was a columnist at Big Think, where she wrote about the perils of a wandering mind, how movie spoilers aren’t all that bad, and how to have a good argument with yourself. She’s also joined us in-studio to discuss what makes a great con artist.

One trait, according to Konnikova, is listening.

Another tactic is leveraging the human desire to say yes.

Konnikova undoubtedly benefits from some of these lessons in Texas Hold’em, a game where bluffing can make or break your bankroll. She said learning to bluff strategically against professional players is a difficult pursuit, but that her background in psychology has made it easier for her to read people and situations at the table.

Konnikova said she chose to write about Texas Hold’em because she’s interested in how skill and chance play out in our lives. In other words, she’s using poker to tackle the philosophical question: how much of our lives do we actually control?

You can see Konnikova take on that question and more next Wednesday, August 1 at NeueHouse Madison Square—doors open at 6:15 p.m. and the conversation starts at 6:30 p.m. RSVP here. 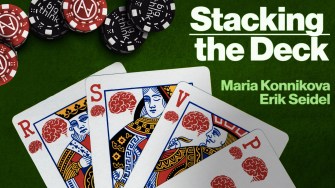 Related
Starts With A Bang
Ask Ethan: What are white holes, and do they really exist?
In General Relativity, white holes are just as mathematically plausible as black holes. Black holes are real; what about white holes?
Life
Strange life forms create an “alien” ecosystem in an abandoned uranium mine
Slimy biofilms made up of bacterial and eukaryotic life forms have taken over an abandoned, flooded uranium mine in Germany.
Hard Science
Earth has an eerie “sodium glow,” and astronomers use it to image stars
Air currents in our atmosphere limit the resolving power of giant telescopes, but computers and artificial stars can sharpen the blur.
Health
How saliva changes the flavor of food
“It’s a liquid, but it’s not just a liquid.”
High Culture
Why are flood myths so common in stories from ancient cultures around the world?
Could the prevalence of flood myths around the world tell us something about early human migration or even the way our brains work?
Up Next
Mind & Brain
Researchers say this 5-minute technique could help you fall asleep more quickly
To get a good night’s sleep, is it better to write down your achievements or the to-do list for the next day? Researchers tested the two different sleep techniques in the lab.