Today we’re pleased to announce our second Big Think Book of the Month, the dazzlingly ambitious Less Than Nothing: Hegel and the Shadow of Dialectical Materialism, out May 22, 2012 from Verso Books.

Slavoj Žižek has been called “the most dangerous philosopher in the West” for his analysis of the worldwide ecological crisis, the biogenetic revolution, and apocalyptic economic imbalances. But the whole time he was writing about political theory, his heart was with Friedrich Hegel — a 19th century German idealist philosopher who revolutionized the Western understanding of the mind. (Sartre and Dewey were fans, as is Fukuyama.)

In a recent interview, Žižek told Big Think, “For a long time, I behaved as if I was still young, like the future was ahead of me. I was never a so-called mature normal person. All of a sudden [I went] from pretending to be young to discovering, oh my God, I’m in late 50s… I hate this. I’m now like the proverbial woman who celebrates her 39th birthday five times in a row. I realized I cannot pretend that I will have time to do the big work. If I don’t do it now, what I really want to do, I will never do it.” That big work is Less Than Nothing.

For the last two centuries, Western philosophy has developed in the shadow of Hegel, whose influence each new thinker tries in vain to escape… Today, as global capitalism comes apart at the seams, we are entering a new transition. In Less Than Nothing, the pinnacle publication of a distinguished career, Slavoj Žižek argues that it is imperative that we not simply return to Hegel but that we repeat and exceed his triumphs, overcoming his limitations by being even more Hegelian than the master himself. Such an approach not only enables Žižek to diagnose our present condition, but also to engage in a critical dialogue with the key strands of contemporary thought-Heidegger, Badiou, speculative realism, quantum physics and cognitive sciences. Modernity will begin and end with Hegel.

A caveat — at 1000 pages, this book is about as thick as the Bible. We had to ask ourselves, “Is this book club material?” After cheating and reading the introduction and first chapter, we were hooked. In the first 30 pages, Žižek free-associates his way through Alan Turing, Hans Christian Anderson, Hercule Poirot, Kafka, Kant, Wittgenstein, and God. We couldn’t put it down. And what better way to live up to our own name than by reading on?

The entire Big Think editorial staff is now engaged in a friendly rivalry over who will finish it first. Join us this month as we tweet our favorite quotes and post video interviews with the author. Feel free to comment and participate even if you haven’t read the entire thing yet. (We haven’t either!)

And thanks to Verso, we have two lovely hardcover copies of the book to give away along with two of our Thinking Man t-shirts. To enter the giveaway, email your name, address, and t-shirt size plus a sentence or two about why you want to read the book to info@bigthink.com. 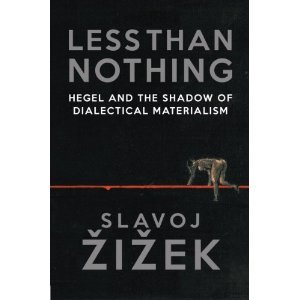 Check out the first video from our interview with Slavoj Zizek.

Summer reading: Which new releases are you anticipating for June, July, and August? To suggest selections for our Book of the Month, email megan@bigthink.com.

Role-playing games like Dungeons and Dragons offer a valuable insight: Life is about shifting labels.
Up Next
Politics & Current Affairs

U.S. Deepens Ties in Iraq With Sale of Drones to Protect Oil

The agreement in which Iraq will purchase surveillance drones from the U.S. is the latest in an effort to help keep oil terminals within the Iraqi territory in the Persian Gulf safe.  In turn, it allows the United States to strengthen its ties to the country.