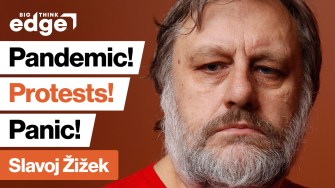 Join the live stream free via YouTube and Facebook, or via Big Think Edge (for subscribers only).

Slavoj Žižek is a world famous philosopher with dozens of books to his name. He is well known for his quirky style, anti-capitalist commentary, dedication to subjects that most people wouldn’t think a philosopher worries about, and his tendency to be very funny.

While he is renowned for his work on Marxism, psychology, and ideology, he finds the time to comment on nearly everything there is to comment on. He has made a couple of movies, written the captions for a clothing catalog, and has run for office in his native Slovenia in addition to his academic work. He also enjoys making pasta.

He makes no attempt to hide his love of wit. He often refers to his love of the Marx Brothers and took time in a book about how bound we are to ideology to explain a Monty Python joke. While some of his jokes are unsuitable for publication here, we have compiled a list of seven of his best jokes for you to enjoy. These jokes are all sourced from the book Žižek’s Jokes. They are, in turn, sourced from his various works and interviews about topics as diverse as freedom, theology, communism, popular media, how we try to sanitize the world with language, and cooking.

In an old joke from the defunct German Democratic Republic, a German worker gets a job in Siberia; aware of how all mail will be read by censors, he tells his friends: “Let’s establish a code: if a letter you will get from me is written in ordinary blue ink, it is true; if it is written in red ink, it is false.” After a month, his friends get the first letter, written in blue ink: “Everything is wonderful here: stores are full, food is abundant, apartments are large and properly heated, movie theaters show films from the West, there are many beautiful girls ready for an affair—the only thing unavailable is red ink.”

And is this not our situation till now? We have all the freedoms one wants—the only thing missing is the “red ink”: we “feel free” because we lack the very language to articulate our unfreedom. What this lack of red ink means is that, today, all the main terms we use to designate the present conflict —”war on terror,” “democracy and freedom,” “human rights,” etc.—are false terms, mystifying our perception of the situation instead of allowing us to think it. The task today is to give the protesters red ink.

There is an old Jewish joke, loved by Derrida, about a group of Jews in a synagogue publicly admitting their nullity in the eyes of God. First, a rabbi stands up and says: “O God, I know I am worthless. I am nothing!” After he has finished, a rich businessman stands up and says, beating himself on the chest: “O God, I am also worthless, obsessed with material wealth. I am nothing!” After this spectacle, a poor ordinary Jew also stands up and also proclaims: “O God, I am nothing.” The rich businessman kicks the rabbi and whispers in his ear with scorn: “What insolence! Who is that guy who dares to claim that he is nothing too!”

Why There Are No Viable Political Alternatives to Unbridled Capitalism

The God we get here is rather like the one from the old Bolshevik joke about an able Communist propagandist who, after his death, finds himself in hell, where he quickly convinces the guards to let him leave and go to heaven instead. When the Devil notices his absence, he quickly pays a visit to God, demanding that he return to hell what belongs to the Devil. However, immediately after the Devil starts to address God: “My Lord …” God interrupts him: “First, I am not Lord but a comrade. Second, are you crazy talking to a fictional being?—I don’t exist! And third, be short, otherwise, I’ll miss my party cell meeting!”

This is the God today’s radical Left needs: a God who wholly “became man”—a comrade among us, crucified together with two social outcasts—and who not only “doesn’t exist” but also himself knows this, accepting his erasure, entirely passing over into the love that binds members of the Holy Ghost (the party, the emancipatory collective).

There is a nice joke about Jesus Christ: in order to relax after the arduous work of preaching and performing miracles, Jesus decided to take a short break on the shore of the Sea of Galilee. During a game of golf with one of his apostles, there was a difficult shot to be performed; Jesus did it badly and the ball ended up in the water, so he did his usual trick: he walked on the water to the place where the ball was, reached down and picked it up. When Jesus tried the same shot again, the apostle told him that this is a very difficult one — only someone like Tiger Woods can do it; Jesus replied, “What the hell, I am the son of God, I can do what Tiger Woods can do!” and took another strike. The ball again landed in the water, so Jesus again took a walk on the surface of the water to retrieve it. At this point, a group of American tourists walked by and one of them, observing what was going on, turned to the apostle and said: “My god, who is this guy there? Does he think he is Jesus or what?” The apostle replies: “No, the jerk thinks he is Tiger Woods!”

This is how fantasmatic identification works: No one, not even God himself, is directly what he is; everybody needs an external, decentered point of identification.

When the Turkish Communist writer Panait Istrati visited the Soviet Union in the mid-1930s, the time of the big purges and show trials, a Soviet apologist trying to convince him about the need for violence against the enemies evoked the proverb “You can’t make an omelet without breaking eggs,” to which Istrati tersely replied: “All right. I can see the broken eggs. Where’s this omelet of yours?”

We should say the same about the austerity measures imposed by IMF: the Greeks would have the full right to say, “OK, we are breaking our eggs for all of Europe, but where’s the omelet you are promising us?”

Slavoj Žižek: Democracy and Capitalism Are Destined to Split Up

Take the old joke about the difference between Soviet-style bureaucratic Socialism and Yugoslav self-management Socialism: in Russia, members of the nomenklatura drive themselves in expensive limousines, while in Yugoslavia, ordinary people themselves ride in limousines through their representatives.

Christ says to those who want to stone the woman taken in adultery, “Let him who is without sin among you be the first to throw a stone!” he is immediately hit by a stone, and then shouts back: “Mother! I asked you to stay at home!”

A joke from the early 1960s nicely renders the paradox of the presupposed belief. After Yuri Gagarin, the first cosmonaut, made his visit to space, he was received by Nikita Khruschev, the general secretary of the Communist Party, and told him confidentially: “You know, comrade, that up there in the sky, I saw heaven with God and angels—Christianity is right!” Khruschev whispers back to him: “I know, I know, but keep quiet, don’t tell this to anyone!” Next week, Gagarin visited the Vatican and was received by the pope, to whom he confides: “You know, holy father, I was up there in the sky and I saw there is no God or angels …” “I know, I know,” interrupts the pope, “but keep quiet, don’t tell this to anyone!”

Today, the old joke about a rich man telling his servant “Throw out this destitute beggar—I’m so sensitive that I can’t stand seeing people suffer!” is more appropriate than ever.

Here is how anyone can make a good soup in one hour: prepare all the ingredients, cut the vegetables, etc., boil the water, put the ingredients into it, cook them at a simmer for half an hour, stirring occasionally; when, after three-quarters of an hour, you discover that the soup is tasteless and unpalatable, throw it away, open up a good can of soup, and quickly warm it up in a microwave oven. This is how we humans make soup.

Reductionism is a successful way to explain the universe, but it cannot replace experience. This is part of the mystery of life.
Thinking

Love him or hate, Karl Marx redefined geopolitics and shook up the world order.
Up Next
The Present

How our micro-internships can help fill the COVID employment gap

With 45% of recent college graduates under or unemployed, it's time to explore new solutions.