There’s probably never been such a large population of addicts before. With our phones, tablets, and social media, we can’t look away for more than a few minutes at a time without feeling antsy. No meal is worth eating without an Instagram or Facebook snap, and couples text each other from different rooms in the same house, sending their messages up to satellites, around the world and back, just to travel a few yards. What’s wrong with us? Well, according to former Google product manager Tristan Harris, this didn’t just happen — programmers have been deliberately playing with the way our brains operate to turn us into addicts for some time. He calls it “race to the bottom of the brain stem.”

Talking to Anderson Cooper for 60 Minutes, Harris explains that it’s sometimes called “brain hacking.” It’s the dirty little secret of the tech world. If you remember those old stories about movie theaters inserting a few frames of a delicious-loooking iced beverage into a movie to subliminally make you crave a drink from their concession stand, you’ll understand that it’s just a new wrinkle on an old idea: Making customers want a product. But this seems to work, and its effect has been insidious and widespread, with consequences that go beyond selling products, to the way we interact with each other, ideas, and the world. 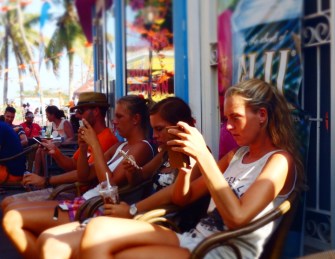 The name of programmer Ramsay Brown’s startup says it all: Dopamine Labs. The company, which does programming for fitness and financial companies, is all about producing code that triggers a neurological response in its audience’s brains. Brown tells 60 Minutes, “A computer programmer who now understands how the brain works knows how to write code that will get the brain to do certain things.” The idea is to cause a rush of dopamine in the brain’s reward center that you basically can’t help but want to experience again and again.

Harris says your phone is a slot machine that you can’t stop playing: “Well every time I check my phone, I’m playing the slot machine to see, ‘What did I get?'” So, sometimes you win, sometimes not, but you have to keep playing.

So what’s a win in this world? How about Likes on Facebook or Instagram? Part of the trick is to optimize software to deliver these meaningless rewards in a way that gives them maximum feel-good impact. Ever notice that they arrive in clumps? Says Brown, “They’re holding some of them back for you to let you know later in a big burst. Like, hey, here’s the 30 likes we didn’t mention from a little while ago.” Would you rather get one and then another in a drip, drip, drip, or experience the rush of suddenly having 10? But what makes the decision to release them to you? According to Brown, “There’s some algorithm somewhere that predicted, hey, for this user right now who is experimental subject 79B3 in experiment 231, we think we can see an improvement in his behavior if you give it to him in this burst instead of that burst.” But these aren’t really experiments in which subjects have knowingly participated — rather, they’re insights gained from collecting an app’s usage data from us all.

Our behavior is constantly being analyzed to reveal what will work. Brown notes that we have to scroll through our Facebook news feed, for example, because Facebook knows that scrolling keeps us involved and searching longer. It’s all about keeping us engaged. After all, whenever an internet service is free, you’re not the customer. You’re the product. “You don’t pay for Facebook. Advertisers pay for Facebook. You get to use it for free because your eyeballs are what’s being sold there.” says Brown.

You’re not the customer. You’re the product.

There’s another game brain hackers play. They deliberately foster a sense of anxiety in users that can only be resolved by returning to their app or site. Cooper visited with Larry Rosen and his team at California State University Dominguez Hills. Rosen says there’s a chemical reason the average person checks his or her phone every 15 minutes. He says it’s anxiety: When you put down your phone, your brain instructs your adrenal gland to produce a burst of cortisol. Cortisol produces a fight-or-flight response, and in a few minutes, you’re thinking, “Gee, I haven’t check in Facebook in a while. I haven’t checked on this Twitter feed for a while. I wonder if somebody commented on my Instagram post.” After hearing this, Cooper admits, “Can I be honest with you right now? I haven’t paid attention to what you’re saying because I just realized my phone is right down by my right foot and I haven’t checked it in, like 10 minutes.”

To prove their point, Rosen’s team hooked up Cooper’s fingers to electrodes to track his heart rate and perspiration. Each time they sent a text message to Cooper’s phone — unbeknownst to him — his cortisol levels spiked, signifying a release of cortisol.

As for Harris’ “race to the bottom of the brain stem,” what he’s referring to is the alarming ease with which programmers seem to be manipulating our most primitive emotions: Fear, anxiety, loneliness, and so on, all with no particular consideration as to what it’s doing to us. As impartial researchers struggle trying to get a handle on things, the apps and updates just keep coming.

Harris tried to get Google’s attention on this with a 144-page internal report that cited brain hacking as being the cause of such outcomes as “weakening our relationships to each other” and “destroying our kids ability to focus.” He’s not asserting that programmers are evil masterminds — rather, an app’s or a platform’s success depends on attracting users’ attention and holding it, and that goal tends to eclipse all other considerations.

Certainly, no one has ever had such an immediate, profound impact on billions of lives they way programmers do now. Without data from a control group of non-users equal in size to what Silicon Valley has from users, it’s difficult to be sure that brain hacking is having the effect it’s believed to have. But Brown, Rosen, and Harris feel our obvious addiction to our devices is evidence enough.

Lumina’s work centers on helping more adults finish degrees and other credentials.
▸
4 min
—
with
Danette Howard
Up Next
The Future

Here’s when machines will take your job, as predicted by A.I. gurus

An MIT study predicts when artificial intelligence will take over for humans in different occupations.