From “Border Walls” to “Anchor Babies,” the immigration debate heats up every American presidential election. The artist collective Postcommodity’s planned instillation titled Repellent Fence (artist’s rendering shown above) challenges the cruelty of much of that rhetoric and questions the very idea of borders. Stretching for two miles between Douglas, Arizona, and Agua Prieta, Mexico, Repellent Fence will bridge two towns on the U.S.—Mexican border by bisecting the line drawn literally in the desert sand to artificially divide culturally indivisible indigenous peoples. For anyone disagreeing with (or appalled by) Donald Trump’s stated immigration policies (and bullying delivery of them), Repellent Fence offers a thoughtful, humanist, and even humorous rebuttal.

The members of Postcommodity — Raven Chacon, Cristóbal Martínez, Kade L. Twist, and Nathan Young — unite to create art that “functions as a shared, indigenous voice to engage manifestations of globalism and the ever-expanding, multinational, multiracial and multiethnic colonizing force that is defining the 21st century through ever-increasing velocities and complex forms of violence.” Where others physically build walls, Postcommodity artistically builds bridges.

Connecting by communicating, Postcommodity “works to forge new metaphors capable of rationalizing our shared experiences within this increasingly challenging contemporary environment.” Repellent Fence falls under the category of these “new metaphors” Postcommodity hopes will “promote a constructive discourse that challenges the social, political, and economic processes that are destabilizing communities and geographies; and connect indigenous narratives of cultural self-determination with the broader public.”

Anyone who laughed bitterly at the spot-on irony of the recent meme about Americans descended from Europeans complaining about illegal immigration (one great example, a photo of a Native American with the words, “So you’re against immigration? Splendid! When do you leave?”) will nod in agreement with any attempt at “constructive discourse” that ends the cycle of divisive hypocrisy and violence. 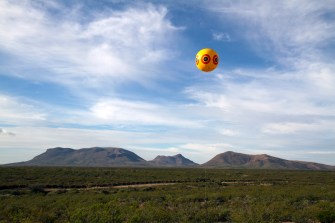 This focus on community comes through powerfully in the conception of Repellent Fence. (You can view their project video on YouTube in English or Spanish.) Postcommodity plans to float 26 tethered “scare eye” balloons, each 10 feet in diameter, 50 feet above the desert landscape (example shown above). To work in what they justifiably call “the center point of the largest and most densely fortified militarized zone of the Western Hemisphere,” Postcommodity coordinated with multiple private, community, and governmental entities to ensure that they, the project, and interested viewers would be safe.

Floating giant, symbolically significant “scare eye” balloons is just the beginning of the event, as Postcommodity will ride the wave of interest further by staging educational and public programing promoting a “binational dialogue and the recovery of knowledge.” You’ll come for the big, funny balloons, but you’ll stay for the sober, reasoned lessons, and come away with a new appreciation of the complexity of the immigration issue too often shouted down by simple-minded, election-year bloviating. But back to the funny balloons, which are intentionally comic.

These Duchampian ready-mades colorfully symbolize the cultural debt America owes to its native peoples, whether it wants to admit it or not.

People usually use real-life “scare eye” balloons as an upgrade from scarecrows to frighten away birds. Unfortunately, birds eventually adapt to “scare eye” balloons and they lose their “repellent” power. Repellent Fence uses these comic balloons to mimic the “epic fail” of U.S. immigration policies, which always claim to “keep an eye on the border” in the name of national security, but more often than not simply provide cover for discriminatory policies against Native Americans and Mexicans. Postcommodity provides an additional twist on the balloons by pointing out that commercially available “scare eye” balloons already “utilize iconography and traditional medicinal colors used for thousands of years by indigenous peoples from South America to Canada.” These Duchampian ready-mades colorfully symbolize the cultural debt America owes to its native peoples, whether it wants to admit it or not.

It will be interesting to see the response to Repellent Fence when it finally gets off the ground on October 9th. Immigration’s become such a heated topic in America today that it should strike a nerve, especially on the political right. As Gordon Knox, director of the Arizona State University Art Museum, says on the project website, “This act of reinhabiting historically shared terrain and marking it with contemporary versions of ancient icons reveals the U.S./Mexican border to be what it is: the arbitrary and artificial overlay of power derived through coercion.” To coerce Americans that the border is both arbitrary and cruel in that arbitrariness as enforced for decades now may be a tall order. But Repellent Fence promises not only to bisect that arbitrary line of power, but also to bisect the bipartisan political grandstanding and cut the issue down to a human level — all by making us look up in the sky and think.

[Many thanks to Postcommodity for providing the images above and other press materials related to Repellent Fence, which will be installed and viewable from October 9-12, 2015 between Douglas, Arizona, and Agua Prieta, Mexico.]

[If you would like to contribute to the Repellent Fence Kickstarter campaign, you can do so here.]

Researchers track thousands of healthy honeybees to figure out what’s leading to their decline.