In Super Sad True Love Story, Gary Shteyngart’s dystopian novel about life in New York City in the very near future, everybody is glued to their uber-iPhone-esque devices that, among other things, collect and transmit data on the “fuckability” of everyone in the room. It’s a crass culture Shteyngart depicts, but not so much crasser than our own. A very similar metric, with a more demure label, is employed by the popular website ratemyprofessors.com, where students can anonymously comment on their professors’ “helpfulness,” “clarity” and “easiness.” Raters can then choose to click one of two radio buttons: “hot” or “not.”

When political scientists grow tired of UN Security Council politics and debt ceiling debates, they like to hunt for frivolous research topics. This is just what four professors from Central Michigan University did a few years ago when they prepared a paper examining “Attractiveness, Easiness, and Other Issues: Student Evaluations of Professors on RateMyProfessors.com.” As long as there’s a data set, you’re set, and luckily, ratemyprofessors.com offered up loads and loads of data.

After conceding that the site is rife with “ethical problems” and has “no place in institutional decision-making,” the four authors settled down to present their findings on the relationships between student perceptions of professor “hotness” and the quality of instruction. Here is the flabbergasting upshot:

A large percentage of American college students who post professor evaluations at Ratemyprofessors.com consider courses to be high-quality when the professor is attractive and the course is easy.

Who would have thunk? Here’s a picture that shows the relationship: 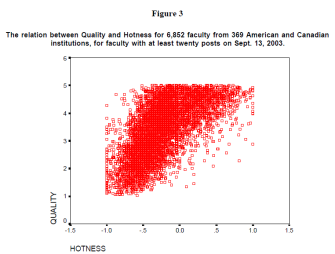 The scatterplot doesn’t lie: the hotter, the better! But wait a minute. Does this mean that sexier professors offer better courses? Or is it an indication that hormonally tweaked college students are misled into believing that the sexier the scholar, the better the course? Or, running the causation the other direction, is it possible that professors appear more lissome when their courses are scintillating?

In case you’re wondering, St. Joseph’s College in Brooklyn had the hottest faculty in the land in 2003, while the University of North British Columbia ranked dead last in North America, all those bearskin rugs notwithstanding. For an updated list of the hottest professors, you’ll have to visit this ranked list on the site.

Here is how the hotness of scholars from different fields stack up: 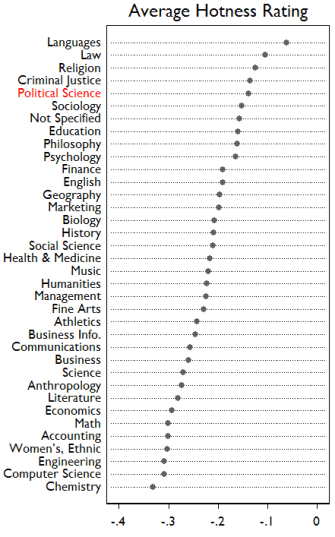 And here is a regression curve, if you can handle that, showing the relationship between intelligence and sexiness:

At the sexpot-laden Monkey Cage, political scientists are, justifiably, lording their relative hotness over economists, telling them to “suck on it.”

Related
Starts With A Bang
The path forward for astronomers and native Hawaiians
A history of injustice and the greatest natural location for ground-based telescopes have long been at odds. Here’s how the healing begins.
Thinking
“Give a f***, actually”: The surprising benefits of being grateful for things you dislike
Radical Emotional Acceptance calls on you to celebrate all of life’s emotions — even the negative ones.
Thinking
Visual thinking: How to understand the inner lives of animals
Humans are good visual thinkers, too, but we tend to privilege verbal thinking.
Strange Maps
The world’s longest straight line connects Portugal to China
It’s nearly 20,000 miles long.
The Well
This is what the fourth dimension looks like
Left–Right, Back–Forth, Up–Down. What’s the fourth dimension?
▸
3 min
—
with
Brian Greene
Up Next
Surprising Science
Portable Radar Could Help Locate Buried Disaster Victims
The device employs the same technology NASA uses to locate Cassini’s position in deep space. With it, searchers can find people buried under as much as 30 feet of crushed material.