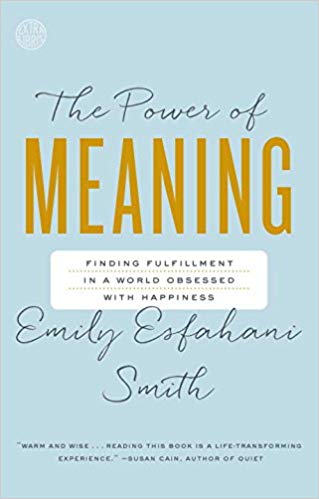 We are obsessed with happiness, often believing it a birthright, yet as journalist Emily Esfahani Smith notes in her book, The Power of Meaning: Finding Fulfillment in a World Obsessed by Happiness, all that searching is actually making us unhappy.

As with my recent conversation with Robert Lustig, Smith cites Aristotle’s concept of eudaemonia as a force for “cultivating the best qualities within you both morally and intellectually and living up to your potential.” Instead of chasing pleasure, we need to institute the search for meaning.

This is challenging during a time when you’re constantly instructed to do “what you love.” Smith counters this advice by invoking German philosopher Immanuel Kant. As with the mythologist Joseph Campbell, who, while famously remembered for saying “follow your bliss,” continued, “If your bliss is just your fun and your excitement, you’re on the wrong track.”

“To Kant, the question is not what makes you happy. The question is how to do your duty, how to best contribute—or, as the theologian Frederick Buechner put it, your vocation lies ‘where your deep gladness and the world’s deep hunger meet.’”

Smith’s beautifully researched homage to this hunger hinges on “four pillars of meaning.” By seeking, cultivating, and maintaining each of these, she argues, happiness arises from a deep sense of contentment rather than the incessant and unyielding grasping for pleasure.

The cruelest punishment imaginable is solitary confinement. Rehabilitating prisoners through this method proves impossible, which is why the American prison system is criticized for being more focused on punishing that reintegrating criminals. Void of human contact, inmates quickly devolve emotionally and psychologically. In part that’s because they’re missing what Smith calls the most important driver of meaning: a sense of belonging.

Chronic loneliness, she notes, “compromises the immune system and leads to early death.” Smith cites the Society for Creative Anachronism, a group of medieval enthusiasts that has grown from fifty fans in 1966 to 60,000 members today. Besides attending numerous events each year, the tribe also displays great feats of empathy, such as raising over $10,000 when members were caught in Hurricane Katrina. To Smith, this signifies the selflessness that exists in like-minded groups.

“Only through focusing on others do we build the pillar of belonging for both ourselves and for them. If we want to find meaning in our own lives, we have to begin by reaching out.”

Speaking of prison, Smith tells the story of Coss Marte, a former Lower East Side drug dealer who was making $2 million a year after turning a lucrative Manhattan street corner into a delivery business. When arrested in 2009 he discovered the timing was prescient, as he would have likely died from cardiovascular problems due to his terrible eating habits.

Marte is a prison transformation story turned good. Exercise changed his life; he spent hours every day working out while incarcerated. In 2016 his “prison bootcamp” classes, ConBody, had over 5,000 clients. Marte’s instructors are previous inmates as well, all of whom have found a shared sense of purpose in transforming others through sweat and tears, leaving the blood to pump towards the heart.

“Purpose is a goal toward which we are always working. It is the forward-pointing arrow that motivates our behavior and serves as the organizing principle of our lives.”

George Dawes Green founded The Moth in 1997 after a drunken evening that featured bourbon and stories on a Georgia porch. After moving to New York City he attended too many boring poetry readings and wanted something that captured the vibrancy and immediacy of sharing well-crafted stories with others.Today The Moth produces over 500 shows a year around the world.

Advanced communication skills allowed our species to dominate the animal kingdom. Sharing thoughts, ideas, and emotions with others helps keep societies intact. Storytelling is our great tradition; expressing our own biographies and learning from those of others are integral components of our cognitive inheritance, as necessary as food and shelter.

“The stories we tell about ourselves help us understand who we are, how our lives developed, and how they could have unfolded differently. But we also find meaning in the stories told by others.”

Smith grew up in a Sufi household. One of my favorite spiritual traditions is the ritual dance of whirling dervishes (which I cover through the music of Mercan Dede in my first book). Through spinning, which is a physical homage to the poetic works of Mevlana Jalal al-din Rumi and his master work, Masnawi, the devotee attempts to achieve fana (annihilation), which is accompanied by rich symbolic textures: the dervish’s hat is a gravestone, their cloak a coffin, and white shirt a shroud. The flute (ney) serves as the mythological Sur waking the dead on the day of Resurrection. In the hall, a line is drawn to divide the visible and invisible worlds, one end human, the other divine.

Transcendence is at the heart of most spiritual traditions. It can be achieved through psychedelics, music, scripture, or meditation. A deep sense of connectedness carries adherents beyond the normal trappings of society. People are able to intimately connect with their environment and peers. Writing of volunteers in a 2015 study focused on the development of empathy through transcendence, Smith notes:

“They abandoned the conceit, which many of us have, that they were the center of the world. Instead, they stepped outside of themselves to connect with and focus on others.”

Derek Beres is the author ofWhole Motion: Training Your Brain and Body For Optimal Health. Based in Los Angeles, he is working on a new book about spiritual consumerism. Stay in touch on Facebook and Twitter.

Related
Life
Scientists use CRISPR to insert an alligator gene into a catfish
Disease kills off 40% of farmed catfish. This gene protects them.
Neuropsych
How you breathe affects your brain
Your breathing rhythm influences a wide range of behaviors, cognition, and emotion.
Health
What happens when regular porn watchers abstain for a week?
Researchers watched for signs of withdrawal — but didn’t find any.
Neuropsych
Daily caffeine intake temporarily alters your brain structure
Compared to people who took a placebo, the brains of those who took caffeine pills had a temporarily smaller gray matter volume.
Thinking
Why you should laugh at yourself, according to Seneca and Nietzsche
“It is more human to laugh at life than to lament it.”
Up Next
Elon Musk must make Tesla a $650 billion company, or forfeit his paycheck
CEO pay is based on…well, I don’t really know what. But it’s almost never based on performance, and many CEOs fail miserably while collecting a huge paycheck. Not Elon Musk.