Tesla, Inc. will announce that its CEO, Elon Musk, plans to make Tesla into T̶h̶e̶ ̶O̶w̶n̶e̶r̶ ̶a̶n̶d̶ ̶R̶u̶l̶e̶r̶ ̶o̶f̶ ̶t̶h̶e̶ ̶U̶n̶i̶v̶e̶r̶s̶e̶  a much more successful company. If he fails at that, he simply doesn’t get paid.

The market value goals Musk is setting for the company will increase in increments of $50 billion at a time, up to $650 billion, over 10 years. There are also a dozen revenue and adjusted profit goals to meet over the same time period.

If any of the goals are not met, then he doesn’t receive a dime for that period. 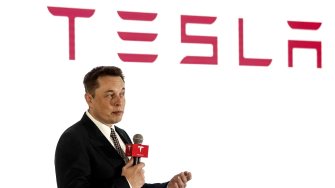 Elon Musk, Chairman, CEO and Product Architect of Tesla Motors, addresses a press conference to declare that the Tesla Motors releases v7.0 System in China on a limited basis for its Model S, which will enable self-driving features such as Autosteer for a select group of beta testers on October 23, 2015 in Beijing, China. (Getty Images)

In a time of increasingly large “golden parachutes” for even failed CEOs and companies, it’s a radically different approach to compensation.

An added bonus for Tesla employees? They all receive some percentage of Tesla stock, so if it’s indeed that successful after 10 years, then everybody working there will benefit as well.

(And…lest you be concerned about his well-being should the goals remain unmet, he’s worth $20 billion already. So yeah — there’s that.)

Related
Life
Scientists use CRISPR to insert an alligator gene into a catfish
Disease kills off 40% of farmed catfish. This gene protects them.
Neuropsych
How you breathe affects your brain
Your breathing rhythm influences a wide range of behaviors, cognition, and emotion.
Health
What happens when regular porn watchers abstain for a week?
Researchers watched for signs of withdrawal — but didn’t find any.
Neuropsych
Daily caffeine intake temporarily alters your brain structure
Compared to people who took a placebo, the brains of those who took caffeine pills had a temporarily smaller gray matter volume.
Thinking
Why you should laugh at yourself, according to Seneca and Nietzsche
“It is more human to laugh at life than to lament it.”
Up Next
Smart Skills
Why the U.S. just fell off the list of top 10 most innovative countries
It’s the first time the U.S. has fallen off the top 10 list since Bloomberg began its index.