Bits Versus Stuff: Peter Thiel Asks Why Has Innovation Stalled

We have a background assumption that we are living in a technologically-accelerating civilization. Peter Thiel has a different view of where we are headed, and he says we need to fight hard to improve our future prospects. 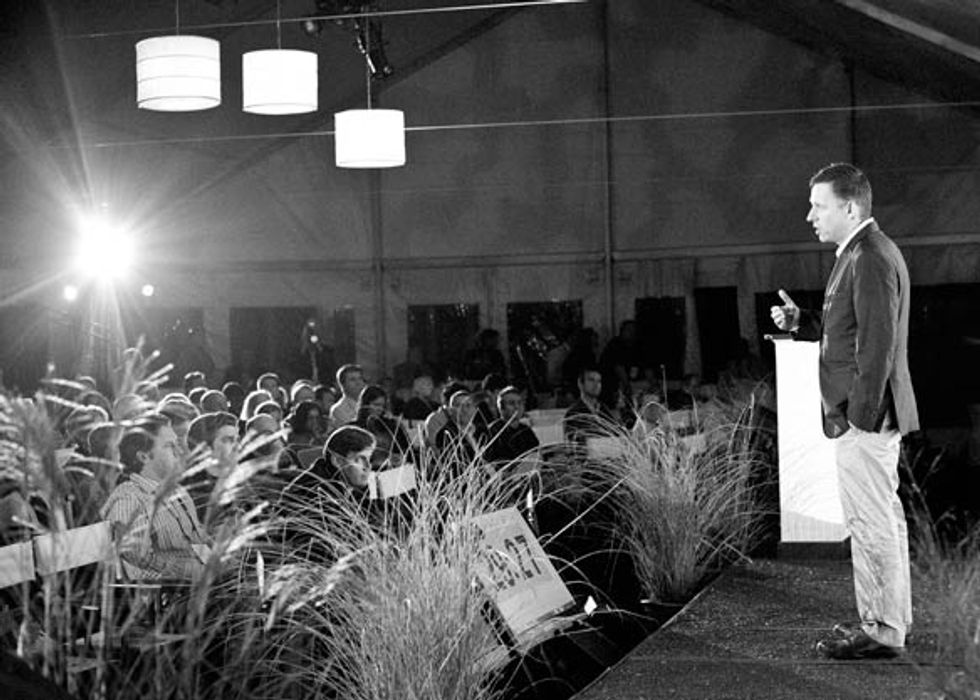 "It would be hard to imagine the President of the United States declaring war on Alzheimers," Peter Thiel says, "because our pessimism about technology has started to seep into the system." That's right, we are pessimists whether we want to admit it or not, and it can be seen in our diminished expectations of progress in a wide range of fields.

Thiel delivered these remarks at The Nantucket Project, a festival of ideas that was held last month on Nantucket, Massachusetts. If Thiel's keynote address may have seemed like the buzz kill of the weekend, that may be because, as he says, the experts that we often hear from "are insanely optimistic about everything." Indeed, experts are incentivized to view innovation with rose-colored glasses. Doom and gloom doesn't get scientists research dollars. And Thiel says that venture capitalists, a group he belongs to, can be some of the most incorrigible optimists.

This wild-eyed optimism prevails, Thiel says, despite our diminished expectations for the kinds of problems that technology might actually be able to solve. And so we continue to operate with "a background assumption that we are living in a technologically-accelerating civilization." Thiel has a different view of where we are headed, and he says we need to fight hard to improve our future prospects.

Thiel notes that "horizontal growth" -- achieving progress by copying things that are done well in advanced nations -- is great for the developing world. That's China's plan. And yet, Thiel also identifies a corresponding pessimism in 'advanced' nations, a pessimism that implicitly suggests "there is nothing left to do in the developed world."

Sure, we've had progress in computing, and that progress shouldn't be downplayed, Thiel says. But we tend to mistake progress in computing for progress in all areas. However, if we survey our rate of progress in many different industries, the outlook is fairly bleak. When it comes to transportation, Thiel says "we're no longer moving faster," literally. And part of the reason we don't have things like supersonic planes, he says, "is due to the failure of energy innovation."

Just how bad is our stagnation in energy innovation? Thiel says we still haven't recovered from the oil shock of the 1970s. Clean energy companies are going out of business while "you wouldn't want anyone to go into nuclear today," Thiel says, because that industry "has been on a very bad trajectory" for decades. If that picture isn't depressing enough, Thiel also points to deceleration in health care and food.

This diagnosis leads us to a rather complicated question: how much value gets created by bits versus stuff? While it's hard to measure the growth in technology versus progress in the science of making stuff, Thiel looks at the fundamental economics of it.

From 1932 to 1972, average incomes in the U.S. went up by 350 percent. "This was a world where people came to expect that things would get better every year," Thiel says. From 1972 to the present, on the other hand, we have seen only a 22 percent rise in average incomes. In other words, we are "running harder and harder and faster and faster to stay in the same place." Thiel points out that our current stagnation is rarely diagnosed this way, but the implications of continuing on this path point to a future that certainly isn't going to be as good as the optimists expect.

"What's extremely dangerous is when you have a belief in progress and you act on it and it doesn't happen," Thiel says. For instance, there would be no problem with the government borrowing a huge amount of money "if you had enough growth to make that borrowing manageable." But that is not the case today.

So what has caused our present stagnation? Thiel points to a number of popular hypotheses that are, not surprisingly, based on political ideology. "If you're liberal," Thiel says, "you would say we haven't invested enough in science, engineering and education." If you're libertarian -- which is Thiel's political bias, as he points out, we have too many regulations. In other words, he says, "we've outlawed innovation." The conservative argument, Thiel says, is that progress requires sacrifice, and that is why so many of our advances can be linked to military innovations. The problem with that view is, as Thiel puts it, "Why should we work 80 hour weeks to build faster and better rockets" if we're going to be friends with the Russians?

Thiel also points to non-ideological arguments, such as the notion that "all the low-hanging fruit has been picked." In other words, there are no easy innovations left to be found. Another hypothesis is that we're living in a much more skeptical age that no longer "views technology as an absolute good."

So how do we re-accelerate technology in the coming decades? Thiel breaks down two different mindsets that people have. The optimists say everything is working, don't change anything. The pessimists, on the other hand, say our situation is hopeless. Since, there's nothing we can do, "just be a hipster ice cream salesman," Thiel says. To translate these viewpoints into what our views of 'American exceptionalism' may be, Thiel says the pessimist is essentially saying that it's fine for America to be ordinary. The optimists, on the other hand, are like people "who've taken too many self-esteem classes," Thiel says. "We're the best, and we don't have to do anything."

Thiel rejects both of these mindsets. "We should accept there has been stagnation," he says, "and we should find ways to fight hard" to change our prospects for the future.