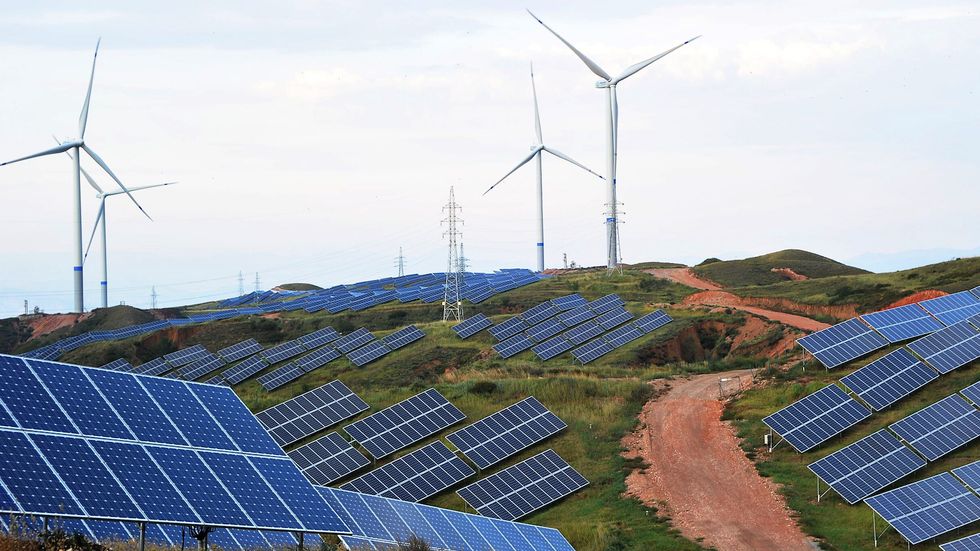 Solar panels and wind turbines are pictured on a mountainside at Shenjing Village on July 2, 2018 in Zhangjiakou, Hebei Province of China (photo by VCG).

The Sahara desert is the largest region of its kind in the world, second only to Antarctica and the Arctic, and it's the biggest “hot desert" of any on our planet. Next to that, on its southern border, is the Sahel, a “transition" region that is not nearly as dry or barren.

Together, these regions are spread throughout 10 countries, including North Africa, Egypt, and Sudan, which means that the total area is roughly the size of China or the United States. Despite its size, the central Sahara itself receives about an inch of water per year in precipitation. Think about that.

The Sahara desert is one of the largest regions on Earth. Transforming it through solar and wind farms could be a game changer (Wikimedia Commons).

It hasn't always been this way; every 41,000 years or so, because of the tilt of the Earth's axis (and therefore, the North African monsoon season), it becomes a lush savannah, teeming with life and water.

A team of scientists has concluded that deploying solar and wind farms across the region will produce significantly more rain (and therefore, more natural vegetation) in the areas that they would exist. Because of what the study referred to as the “albedo—precipitation—vegetation feedback" (albedo is basically the reflection of light and electromagnetic radiation), the models that scientists used showed that deploying solar and wind farms in the Sahara would increase precipitation by 1.12 mm per day (.0441 inches). Translation? Sixteen inches per year of increased rain. That's 16 times what normally occurs in the most arid parts of the Sahara, and double that of the Sahel.

A Moroccan girl walks past a tent during a mountain biking race in the Sahara. Currently, most of the Sahara Desert's 3.5 million square miles looks like this (photo credit FRANCK FIFE/AFP/Getty Images).

As with most scientific proposals, it's not practical to implement just yet; the models used require 9 million square kilometers, which presents challenges for the political, social, and economic systems of all 10 countries in the region. Also, wind farms would initially—before natural vegetation grew and began to cool things and change the cycles—raise temperatures by 2 degrees Celsius. Solar systems would raise temperatures by 1 degree Celsius. However, that's a far cry from what fossil fuels do: they raise temperatures 30 times that of solar voltaic cells.

The leftmost column shows the rise in temperature associated with building wind and solar farms. While doing so would increase the temperature, this change would also be offset by the increase in precipitation shown in the rightmost column (Image credit: Science.Org).

Still, the potential benefit is tantalizing; such a monumental installation of solar and wind farms has the potential to produce, each year, four times the energy that the world consumes.

“Our results obtained from experiments performed with a climate model suggest that, for installations of wind and solar farms with current conversion efficiency in the desert at a scale large enough to power the entire world, the impacts on regional climate would be beneficial rather than detrimental, and the impacts on global mean temperature are still small compared with those induced by CO2 emission from fossil fuels."